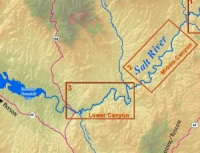 Two of three men who went for a test drive and disappeared were found dead near Salt River in Arizona on Friday, according to ABC15.
Authorities said the three friends, 23, 28,and 38, took the new Jeep out to the river bottom to test it’s performance, after it had been repaired. When they did not return home the family called police and filed a missing persons report.