Michelle’s body was found.  Kenneth Lee Thompson, 29, was convicted of first-degree murder and kidnapping.  Police said that Michelle McCoy was killed over a fight over a stolen cellphone. 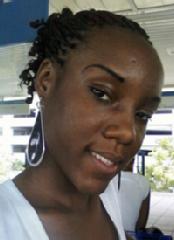 It is now believed that missing Michelle McCoy, 20, was forced into a silver Chrysler minivan on January 10th and was taken against her will.
Michelle’s twin sister Melissa reported her missing on January 13th. She had not heard from her sister since January 10th, when Michelle told her that she was going with a friend named K.T., and would be back later. Her father Otis Winn remembers her getting into a minivan that he didn’t recognize, outside their home on Churchill Drive in Northwest Jacksonville.