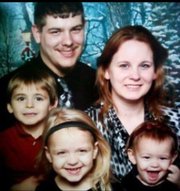 UPDATE 2013 – A confession by Sandra Inman states that her son, William Inman accidentally strangled his estranged wife , Summer Inman before his parents helped hide the body in a southeast Ohio septic tank.

She stated she wanted to see her grandchildren more, so she and her husband and son forced her daughter-in-law, Summer, into a car in Logan to discuss the issue.  That is when Inman said her son bound his wife’s wrists with plastic zip ties and unintentionally strangled her with one around the neck. Inman said they panicked and hid the body. Sandra Inman pleaded guilty to murder and other charges and was sentenced to 15 years to life in prison. Her husband, William  and son, William were convicted and sentenced to life in prison.

Update:  The coroner’s office reveals that Summer was strangled.

Logan police Chief Aaron Miller said that Sandra Inman, the mother-in-law of Summer Inman that was kidnapped, told investigators that the body of her daughter in-law, Summer Inman, had been placed in a septic system behind a church near Nelsonville, Ohio.

Late last night police had recovered a body, but would not say it was Summer’s although most everyone knew it was.

So, “these people” (Summer’s in-laws and her estranged husband) “ALLEGEDLY,” put the mother of their grandchildren in a tank of shit.  “How can they even look their own grandchildren in the face,” said my mom?  I hope they get prosecuted to the full extent of the law.