Larry Baker: Missing from Texas since 2010

This cute little baby is Larry Baker.  He was born on December 31, 1955 and he grew up in a little town called Towanda, Pennsylvania

.  He has a mom and dad and sister and a brother, and he had a house full of love.

Then Larry’s sister went through a divorce

in 2003, and her brother came to live with her.  They were very close and seven years passed.  Then one cold and rainy Friday night, on January 29, 2010, he went outside the home and disappeared.  His family has not seen him since.

Larry Richard Baker is 55, and it is not known what clothing Larry was wearing, but he did have on white tennis shoes with blue trim. Larry is 5’11”, 175 pounds, wears glasses and has a large mustache. Larry also has a medical condition and he had recently suffered a stroke, before he disappeared.

The Sheriff’s Dept. and volunteers searched for Larry, when he went missing, but he was not found. 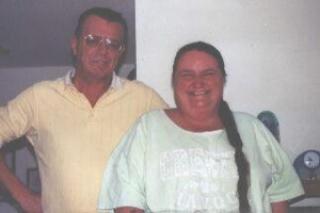 Larry’s brother, Jerry emailed me and told me about Larry.  He misses him very much and hopes someone has information about his whereabouts.  His sister, Diane, is still waiting for him to come walking through the door.

Over time Larry became part of many missing women and men from Liberty County. I went to Cleveland, Texas in 2017 and did a video about his disappearance along with missing Rodney Stokley, who knew Larry Baker. You can see that video below:

If you have seen Larry, or if you have any information about his disappearance, please contact the Liberty County Sheriff’s Dept. at (409) 550-2281.  If you don’t want to talk to the police then email me and you can talk to Jerry directly.

His family and I, thank you!
Read about the Missing Texas Forty

Read Larry’s brother Jerry wants the police to look for his brother.

Read about a search team that is searching for Larry