Update: On May 7,  Jim Polzin’s body was found, with a gun in hand behind the Pierce Senior Center in the brush, near railroad tracks and I69 overpass.

Before I sign off tonight, I wanted to ask everyone to look out for Jim Polzin from Flint, Michigan. 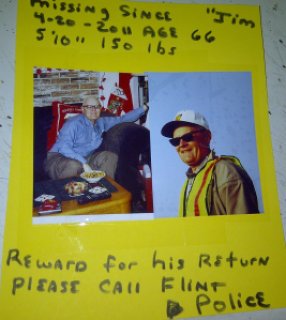 Jim Polzin, 66, has not been seen since April 20th.  His neighbor wanted to take him to dinner and Jim said he didn’t feel good and was going to bed.

Jim lives on Windemere near Dort Highway in Flint, and goes for walks near the park.

gone.  Nothing looked disturbed.  His prescription shows that the last medication

he took was on Wednesday.

over a white t-shirt