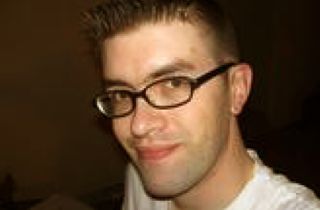 Charles Schoeneman was one of the saddest cases I had every done a story on in 2009. On Tuesday, one of his alleged murderers was sentenced to 15 years in jail. Because of Charlie’s mother, Deborah, I was able to follow this story from beginning to end as she kept me updated on the case. I talked to her again on Wednesday as she told me what happened at the trial and how the death of Charlie has affected the family. Please take time to follow the link to read about Charlie’s story.

In April of 2009, I wrote about a Navy man, Charles Schoeneman, 32, who was found murdered in his apartment. As I researched his story, I couldn’t help but find myself becoming upset over his death.

No, I did not know him, but I learned about him, and knew that this was a good man, a good soldier and a good son. After my article was printed, my thoughts were confirmed when comment after comment was made about Charles. They all painted a clear picture of someone that everybody liked, who were touched by his kindness, and were proud to be his friend.

Two men were charged with Charles’ murder, Robert Navarro, Jr., 23 and Jeffrey Jin Dunn. The story started to unfold, that Robert and Jeff had allegedly met Charles on the internet pretending to be a woman named, Lisa Jenson. Shortly before Charlie’s death, he signed over a $1 million life insurance policy to Jeff.

Then that fateful day, allegedly Robert and Jeff showed up at his apartment and allegedly murdered Charlie. I don’t want to go into the details here, but you can read any of the stories at the links below to read more. Now, I am sure you might have thought it was a little strange that I keep bringing up allegedy. The reason is that Jeff, while waiting for his trial for the murder of Charles, had died in jail in 2010. He had gotten into a fight with another inmate and a short while later he was found dead. The autopsy ruled it was a heart attack, and with Jeff dead, there would be no trial and without a trial we have to assume that Jeff is innocent of any wrongdoing.

Then on May 31, 2011, two full years after Charles’ murder, Robert was sentenced for his admitted role in the stabbing of Charles. His sentence was 15 years to life, minus the two years he has already served.

I spoke with Charlie’s mom, Deborah, who like her son, in her own right is a good person. She told me that her husband and her were allowed to read their Victim Impact Statements at the trial. She in part, spoke about his service and how proud she was of him.

Charlie’s father, Charles also spoke and said, “I have read that going forward after the death of your child is akin to having a limb amputated and learning to live with the loss of that limb. For me, I think it is worse than that and cannot think of an analogy that compares.”

During the trial, Robert’s defense attorney brought out that Robert was a puppet in the crime, which Deborah does not agree with.

“Mr. Navarro is portrayed as someone who unwittingly went along on an innocent ride and took part in this murder. I doubt this; and even if it is possibly true, at any point of time, he had the option of refusing to cooperate, of turning around and leaving, of calling the police…”

So, Robert goes back to jail to serve his sentence and Jeff is serving his in heaven or hell, depending on who you talk to, and the Schoeneman’s have returned to their home town to serve out their own sentence, of a life time without their loving son.

I received a notice this morning that the Charles K. Schoeneman’s Guest Book will go offline on April 24th.

You may not remember Charles K. Schoeneman. He was the 32-year-old U.S. Navy man that was allegedly killed over money, one year ago, April 14, 2009. He was found dead in his apartment from 39 stab wounds, when a coworker went to find out why he didn’t show up to work.

Through the combined efforts of the San Diego Sheriff’s Dept. and NCIS, they arrested the two suspects, Jeffrey Jin Dunn and Robert Navarro, Jr., of Kingsburg, 4 months later. At this writing, they are still in jail awaiting their trial.

Of all the articles I have written over the year, this one has received the most comments left by readers. Comments of support from his family, friends, and surprisingly enough, comments of support from friends and family of Dunn and Navarro. They are all there to reminisce, chat, argue or look for any new information from each other. New information that is slow in coming and therefore little to update on.

The story of Charlie’s death still haunts me. I never knew Charlie, but just by looking at his picture he seemed like a very unassuming man, just making his way through life, like all of us. I imagined he was a honest man, a true friend, probably shy and maybe not so street savvy. He probably trusted people, maybe a little too much. He went to work every day at the Navy base in San Diego as an operations specialist and collected his paycheck and paid his rent and bills on time, and he even managed to put some back for his future. I truly believed that if someone needed money, if someone needed a helping hand, that Charlie would have been the first one there to help.

Months before his death, Charlie established a relationship with a young woman. He sent her money, a collective amount of around $25,000, and eventually made her the beneficiary of his one million dollar life insurance policy. I don’t think Charlie ever knew that the female he was communicating with was actually Dunn. According to Deputy District Attorney Curtis Ross, during a hearing, he told the judge that Dunn, over a period of time, extorted $25,000 from Charlie after he established contact with him by creating a fictitious female persona. Navarro’s DNA was found on the knife left in the apartment.

Posted on my Examiner article, “Two plead not guilty in Schoeneman’s murder,” Friend wrote, “So hard to believe it, that it really has been so long, seems like only yesterday sometimes and yet your right. We have hit the 1yr mark and still having to wait for justice to be served. My thoughts and prayers to Charlie’s family and all others that knew him, we still go on, but we will never forget him. I hope the trial will start soon and we can put all of this to rest.”

If you would like to pay your condolences, read post and/or donate to keep Charlie’s memory book online, please visit Legacy.com

Jeffrey Jin Dunn, 23, who was awaiting trial for the murder of Charles Kenneth Schoeneman has died in prison.At 1:24 p.m. on Saturday, deputies at the Central Jail were notified by an inmate that an inmate was “down”. Emergency medical personnel responded to the inmate, that was identified as Jeffrey Jin Dunn.

At first, it was determined that Dunn had succumbed to an asthma attack, but after reviewing security tapes, it was revealed that Dunn and another inmate had engaged in a short physical altercation just before Dunn collapsed.

Dunn and Robert Navarro, Jr were both being held in custody awaiting trial for the murder of Schoeneman, a respected 32-year-old U.S. Navy man that was allegedly killed over money, on April 14, 2009. Schoeneman was found dead in his apartment from 39 stab wounds, when a coworker went to find out why he didn’t show up to work.

The trial for the Schoeneman case is set for May 17, 2011. With Dunn gone, Navarro will be alone facing the charges.

The Sheriff’s Homicide Detail is investigating this incident as a homicide.

Medical Examiner’s Office has not determined the cause of death at this time.

More stories about the Schoeneman case