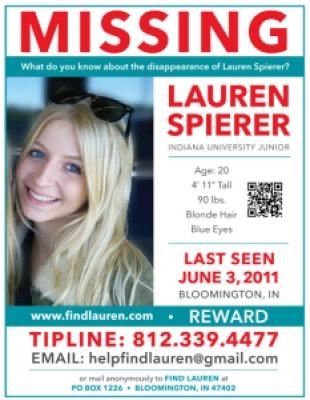 (Type in Lauren Spierer in the search to read all the stories.)

UPDATE:  1/28/16 – FBI is searching at a property in Martinsville in connection to the Lauren Spierer case.  The local news is stating that the FBI assisted the Bloomington police department in the 2900 block of Old Morgantown Road ub Morgan County, Indiana.  According to FOX59, agents searched the property, along with cadaver dogs, Thursday afternoon. The cadaver dogs indicated there was potential evidence at the scene.
The property searched belongs to family of Justin Wagers, who once lived at the property.

A representative of the family of Lauren Spierer tells WDRB that they have not been contacted by authorities, and have no info about the investigation in Martinsville.

– A skull has been found in White River.  A fisherman found the skull about 9:45 p.m. last Sunday near the east bank of the river near Bluff Road and West Raymond Street, according to an Indianapolis Metropolitan Police Department report.

It will take 6-8 weeks for the medical examiner to make an identity.  Until then Robert and Charlene Spierer continue to wait.

UPDATE:  Today is the one year anniversary of Lauren Spierer’s disappearance.

Robert Spierer said he believes his daughter, Lauren Spierer who took medication for a heart condition, could have been drugged at Kilroy’s Sports Bar, a popular college hangout with an outdoor sandy area designed to look like a beach. Authorities reported that Spierer left her shoes and cell phone behind there.

“She could have been given something in her drink, unknowingly, that made her almost incapacitated,” Robert Spierer told FoxNews.com.

Spierer, left her apartment complex around 12:30 a.m. June 3 with a friend, David Rohn, to walk to Rosenbaum’s apartment.

Spierer met a male acquaintance – Corey Rossman – who lived two doors down from Rosenbaum.  (Rossman, was  on a “no trespass” list at Spierer’s building over an incident that happened in 2010)

Rossman left his building with Spierer and they headed for Kilroy’s Sports Bar.

Rossman said he was hurt when he got in a fight with other male students on the fifth floor of the building and doesn’t remember anything. LEO state that Rossman has not memory of this but at this point they find the story contradictory.

At 2:42 a.m., Spierer is seen leaving her building with Rossman and walking up an alley toward Rosenbaum and Rossman’s apartment complex.  Spierer was seen falling flat on her face and Rossman helped her up.  She falls again and then Rossman picks her up.

Police said Spierer dropped her keys and identification card on the way and spent time at the men’s building before leaving at 4:30 a.m.

Rossman’s roommate, Rosenbaum sees Rossman throw up on the carpet and helps him to his room.  Spierer is in the livingroom and tells her to sleep over.

Rosenbaum told police he watched from a balcony as she walked toward her apartment. He watched her till he could not see her anymore which was just before she got to her apartment.  Spierer was never seen or heard from again.

Police are searching for Lauren Spierer, 20, who is a student at Indiana University.

Just a few weeks ago, I wrote up a bit on missing persons and college students, discussing the different reasons so many come up missing.  You can read that by clicking here.

Lauren was last seen near her apartment in Bloomington on Friday around 4:00 a.m.  There is video but nothing is showing her going into her apartment.

Her parents are disparately searching the woods looking for her.

Spierer is 4’11” tall with blonde hair and blue eyes.  She had on a white tank top with a light-colored shirt and black pants.

A $250,000 reward is being offered for any information leading to Spierer’s whereabouts. Anyone with tips in the case is urged to contact the Bloomington Police Department by phone at 812-339-4477 or by email at policetips@bloomington.in.gov.