Family and friends in TC, Michigan – please keep an eye out for Carly Lewis:

Update: October 2011 –  Judge Thomas Powers sentenced Robert Jensen Schwander, 18, to at least 40 years, but not more than 70 for the crime of killing Carly Lewis.

Update:  Robert Jensen Schwander, 17, of Traverse City was arraigned by video from the Grand Traverse County jail at 8:30 AM, on charges of killing Carly Jean Lewis.  If Schwander is found guilty of the charges he faces life in prison. 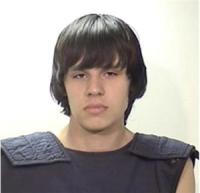 Schwander is the son of a Grand Traverse County Sheriff’s Deputy.

Update:  June 16, 2011 – The body of Carly Jean Lewis, 16, was found hidden in a sand pile at Traverse City’s public works complex off Barlow Street.
Searchers found the body hours after a Traverse City man, 17, confessed to killing her, police said. He was arrested and jailed on suspicion of murder.
Update:  Please see link for update.

Carly Jean Lewis is missing from Traverse City, Michigan.  She is 16-years old and was last seen on  June 2nd at home on Webster Street.

She works at Luigi’s and did not show up for work nor pick up her waiting pay check.  She told her parents she was going to a friends.  Carly does not have her cell phone with her.

The family is currently passing out flyers throughout TC and have started a Facebook page.