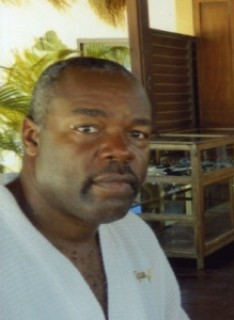 UPDATE:
A body was found in a well on Old Fort Road in Fort Washington, Maryland.  On Saturday, the police confirmed that it was Lenny Harris and that he had been shot and killed and then put into the well.

The police are still searching for the man in the black and white photo below. 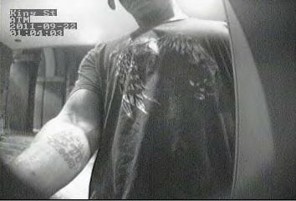 Lenwood “Lenny” Harris, 53, was last seen at the Charles Houston Recreation Center in Old Town Alexandria around 9:00 p.m., on September 21  He had taken a call from someone and left to meet them.

Lenny is a local well-known community activist in Alexandria.  He has lived in Alexandria a long time and gained attention during a dispute between Chatham Square residents when he responded to allegations that crime was on the rise in the neighborhood.

The police found his cell phone on Thursday on the Woodrow Wilson Bridge and someone tried to use his credit car on King Street on September 22 at 1:00 a.m.

Lenny is 6’1″ tall, 210 pounds with dark hair and brown eyes.  He was last seen wearing a gray sweat shirt and gray sweat pants.

He had a presentation scheduled at the Alexandria Adult Detention Center, but he did not show up.

The police have a photo of a man who tried to use Lenny’s credit car.  The man has a tattoo on his arm which you can see in the picture and the police are calling the man a person of interest in Lenny’s disappearance.  The man has a muscular build, a small goatee and mustache.

If you have any information on the whereabouts of Lenny or the person with the tattoo in the photo, or Lenny’s vehicle, please call the police at 703-746-4711.