Tara Calico: Documentary to be made about missing New Mexico teen

As of September 20, 2018, it has been 30 years since Tara  Calico went missing.  Checking on the story, the FBI says it is still an open case and a age-progressed photo of what Tara might look like now has been released.

What happened to Tara Calico?

Tara Calico was 19 when she vanished in 1988.  She was last see on a bike in Rio Communities golf course near her home in Belen, New Mexico.   Witnesses saw a light-colored truck following her on her bicycle on N.M. 47, aka as Highway 6.  Tara was listening to a cassette player. The bike was never found but bike tracks, the cassette and pieces of the cassette player were found.

Over the years, a feature documentary called Vanished has been in the works: In  July 8, 2016, the website posted – “Hi everyone. There seems to be confusion on if the documentary is out yet or if has been abandoned. It is not and it has not. I have been working on this for six years. Have had numerous road blocks, but am happy to say the home stretch is near. I’m in post production and hope to be finished in the near future. Making a Murderer took 10 years to make. Other docs like this have also taken many years. I’ve had to go back to work at different points during the making of this doc to continue funding. Please be patient we are almost there. Thank you for the support!”  (Click here to check on updates on the film.)

RJ Mitte, the actor that plays Walter White Jr. on Breaking Bad will be an executive producer on the project about Tara’s story.  He says he learned about Tara after seeing stories on the news then became friends with Tara’s sister, Michele.  Mitte is supporting the documentary that is being made by one of Tara’s former classmates.

“What we are hoping is that by telling what we know and what we’ve heard is that it will inspire someone to come forward with the location of her body,” Esquibel  told KRQUE in Albuquerque, N.M.

The infamous Photo – Is this Tara?

This photo on the right was found outside a Junior Food Store in Port St. Joe, Florida by a woman. The two are bound and gagged in what appears to be the back of a van.

The woman saw a white Toyota van leave the parking lot just before she spotted the photo. 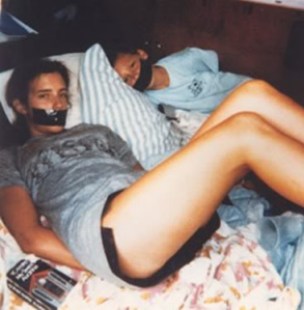 No one knows who these two people are or whether the photo is a hoax or not, but it is thought that the photo is of missing Tara.  The police do not think it is, but Scotland Yard investigated the photo and stated it was Tara.  Tara’s mother believed it was here all the way up till she passed away.

Regarding the post below about Tara and her possible being buried on the Metzler ranch, here is what was found out by one of MPofA’s Facebook fans.

“There is the main one in Belen, New Mexico under the link: http://www.theranches.org/ Then you go under the link: http://www.residentialeducation.org/members/new-mexico-boys-and-girls-ranches-albuquerque-nm/ and it says that there are 5 divisions. And if you look under this link there is a death of a woman and it states that you need to send your flowers and donations to:

That is listed under the link: http://www.danielsfuneral.com/memsol.cgi?user_id=888388 so I am guessing part of her family including her is part owners of the Boys and Girls Ranch. Some of her children and grandchildren (if you look at the death notice) have the last name of Echols. But I do not see anything here about Metzler”

4 thoughts on “Tara Calico: Documentary to be made about missing New Mexico teen”