To read more about this case and see photos click here.

UPDATE 3/7/16 –  A skull was found by a hunter of a hiking trail in Middle Island, reports the New York Post.  Suffolk police are investigating a skull and other bones found by the hunter.

UPDATE:  12/11/14 –  The family attorney for Shannan Gilbert has told PIX 11 news that “he believes he is on the trail of the killer,” of Shannan and also many other people that were found in a dumping ground along Ocean Parkway in Long Island.  Remains of 10 women have been found alone the south shore drive, although I did hear of 11 bodies were found several years back.

Shannan’s autopsy reveals that she had no drugs in her system, and strangely enough the tips of several of her fingers and toes were missing.  What caused this has not be determined at this time.

Ray went on to say that he has pinpointed the last person to see Shannon alive while putting together the wrongful death lawsuit he has filed.  He has hours of depositions  for the lawsuit, but the Suffolk County Police Dept. has no interest in it.

“If I were dealing with a police department that wanted my evidence he probably at this point would be detained,” said Ray.

While I was writing up the story of Shannon’s case I also noted, how should I put it, lack of motivation from the police.  It was not until an off duty police officer with his SAR dog that happened to be practicing came across Shannon’s body in that swampy area where no other police officer could.

Please note that while doing the research on this story and this other one, I was drawn back to the house that Shannan ran from.  The house went up for sale shortly after the incident and photo of the inside of the house were posted.  I thought they were strange photos.  A single bed in an otherwise stark room.  Little furniture in other rooms.  Was the furniture already removed and this was the furniture left behind or was the person living in the house living this way.  It seemed to me to be like a house only used for a one purpose and not a place where someone actually lived day to day.  Back then I didn’t have the capability to copy the photos I saw and now it is too late.  Police have stated they have spoken to the man that owned the house and he was not a suspect.  The house was taken off the market after it didn’t sell.

Previous story:  I get very interesting emails from people that read my blog or follow MPofA on Facebook.  All of them are thoughtful and some are down right insightful.

I brought up Shannan Gilbert’s case again last week, when they found some clothing.  Her remains were positively identified this week.  What was the most troubling to me about the case is the police knew a year ago they had a serial killer that was “dumping” (as they put it) bodies in that area, and they seemed to be moving kinda slow in finding out who was doing this.

The other day, I received this email from an individual that would like to remain anonymous.  Anonymous does not mean not informative or inaccurate information.  Anonymous just means that the author does not want to make anyone mad or have to answer to anyone or suffer from any comments from people that may not agree with their information.  Believe me I understand the latter, as for some the internet has become a way for them to release their unhappiness and stress by verbally beating up on someone that disagrees with their point of view, even to a point of the person becoming a target….but, I digress.

After reading the email over, I realized it had important thoughts in it that I knew my readers would be interested in.

This particular email is about Shannan Gilbert and the Long Island killings.  You can read the frustration, and I identified with it, as I, too, was frustrated with this case.

Here in part, is the email:

“After police found the first 3 bodies, they KNEW they had a dumping ground of a serial killer, so they should have put a task force together back then to scour that entire area. Even now, I still see them using those roving vehicles in the brush with the overhead buckets to look for evidence, so you can imagine how much is probably being overlooked.

I really feel as though police owe Shannan’s family a huge apology for not doing more sooner. And both LE (law enforcement) and the media should posthumously praise her as an angel in death, because had it not been for her investigation, God knows how long those other victims may have laid out there in the elements. Even if Shannan’s autopsy says she drowned, as they theorize, I find it very hard to believe she fled into a serial killer’s lair by coincidence.

Again, this is only my opinion, but I believe the killer could be someone already spoken to by one agency, if not both,  AC and LI (Atlantic City and Long Island) and until police start working those cases as if those victim’s were their own daughters, instead of fringe throwaways, they’ll never solve it.

Had they landscaped those bushes and thickets along that stretch of highway back in the spring, which should have been a given after finding the first 3 bodies, they would have found Shannan months ago.  God knows how many others may still be hidden in that area.

LE can say what they want, but I feel in my gut it’s the same guy who was killing women behind Black Horse Pike in Atlantic City 6 years ago. Perhaps Gilgo should check AC’s reports and double back on all those original suspects to see who’s moved or changed jobs since then, because they may have already interviewed the killer.

Now that Long Island’s site has been exposed, he’s just going to continue somewhere else. Such a sad and scary case.  Why don’t they put the guys voice in the media who was calling the 1st victim’s kid sister years ago, in hopes of the public identifying him? Or get an undercover female officer to flush him out in a Craigslist sting? Or tell LE to make up a pseudo suspect and go on the air telling the media they have their guy? That will make the evil, narcissistic killer angry enough to contact the media to tell them they’re wrong. They’ve got to know by now he’s watching the media hype on him and getting off on all the attention.

There’s also a google website called http://www.bungersurf.com/Bunger_Surfcam/ that does live imaging from Gilgo Beach.  Maybe their images from a while back caught something on camera regarding the killer or vehicles used for transporting the bodies.

To make the statements this past week about Shannan’s case not being connected, and that she ran out of her pants while fleeing makes LE sound ridiculously incompetent. If you ask me, that case is shaping up to sound much like Canada’s serial killer Robert Pickton and Ohio’s Anthony Sowell; both killers targeting working girls and addicts on the fringe of society who wouldn’t trigger much interest in LE, unless pushed by the public.

It’s a shame how killers often get to rack up so many victims before police get around to taking these types of cases serious.

Please pass on my prayers and condolences and tell them the public really does care about seeing them get justice for their loved ones.”

And there you have it.  I believe that the email expresses many thoughts that you probably have had. 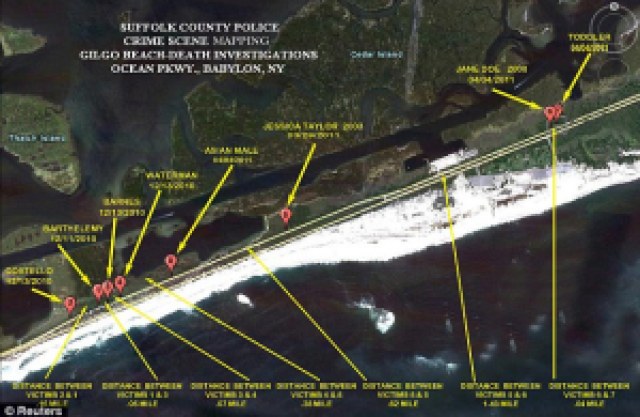 Right now there is a person walking around that is a serial killer.   I have not heard one word about a suspect.

On May 5, 2011, Chief Dominick Varrone, from the Suffolk County Police Dept., briefed the Public Safety Committee of Suffolk County regarding Shannan, and it shows that early on they had decided that her death was not related to the serial killings.

“She spent a couple of hours with that client and then she became disoriented, confused. We’re not exactly — what happened, we have some ideas; we believe drugs may have been involved. And that led to a 911 call which went to our operator initially, but she had no idea where she was and all she remembered was Jones Beach on her way out there. And once she relayed that she thought she was at or near Jones Beach, that call was relayed to the New York State Police, and she was on the phone for about 18 minutes and then she was disconnected. That began a very intensive investigation for her disappearance.”  (Please note there were no drugs found in Shannon’s system).

It is believed that the Long Island Serial Killer has murdered 10 people over the last 15 years.  That is a long time that someone has been wandering around killing, and is still killing.   How many MP’s are out there that may be tied to this case?  Not to mention four dead woman found in a ditch in Atlantic City in 2006.  Authorities have not said it is related to the LI killings, although it remains unsolved.

Many feel that the lack of urgency from the police has to do with the fact that they are looking for a killer that is only harvesting from a group of society they do not consider as valuable as the rest.

“…he’s not selecting citizens at large, he’s selecting from a pool and the selection process is based on — serial killers select on three factors; availability, vulnerability and desirability. These girls who advertise on Craigslist are very available, they’re very vulnerable, they’re willing to get into a car with a stranger. And the desirability factor is covered by the fact that he could select, pick and choose from their advertisements height, weight, whatever he’d like. So these are all factors that a serial killer utilizes in selecting his victims, and right now it’s narrowed to that segment of the population. It’s certainly a concern and danger for all of us. It’s particularly a concern and danger for anyone  who’s engaged in that trade. And unfortunately, you’d be absolutely astonished and amazed, I was, as we’ve looked into this case, the number of people involved in this Internet and metropolitan, you know, anything that involves profiting for sex. It’s just an amazement, it’s very astonishing and it’s very troubling.”