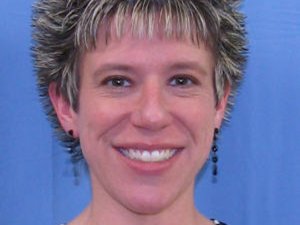 UPDATE:  David Stahl, 41, is being held in Westmoreland County Prison without bond and is charged with killing his wife at their residence.  He is awaiting a preliminary hearing on March 29.

UPDATE:   Rebecca’s body was found Friday, February 24, 2012 in Latrobe.  She was wrapped in plastic and blankets.  She was laying in shubbery about 25 feet off a Unity Township road near Arnold Palmer Regional Airport.  Her husband was missing, but was found in the hospital, but no word on why he was there.

Investigators said they gathered an abundance of evidence over the last few days and that helped lead them to Rebecca’s body.

UPDATE: Investigators obtained a search warrant as they seek leads in her disappearance.They did not say what the search warrant was for, but reports are that Rebecca and her husband had a violent history.

Rebecca Stahl, 37 was last seen at her home on Seton View Drive in Hempfield Township, Pennsylvania on February 20.

Rebecca is a teacher at Derry Middle School and had been recovering at her  home after surgery.  Her family realized she was missing when she never called to confirm plans for a get together.

Rebecca is 5’4″ tall with brown eyes and short blonde hair.