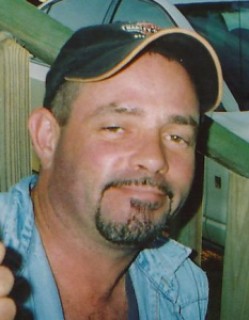 Click here to read about the Missing Texas Forty

UPDATE 8/15/13 – The Liberty county Sheriff’s Office announced that the human remains found on Gladstell Road (CR322) on April 12, 2013 do not belong to Rodney Stokley, Larry Baker, Mark Rhineburger, Dennis Rogers, Edwin Rodgers, or Westley Moore.  The preliminary forensic tests show that the bones belong to a person who was Hispanic or “a similar popular description,” and was between the ages of 15 and 20 years old and 63.5 to 67 inches tall.

UPDATE:  New information has come out that missing Crosby, Texas man, Mark Larry Rhineburger, 39, had told the clerk at the Shell gas station where he was last seen that he felt someone was following him, reports Your Cleveland News.

Days before Mark went missing he also had became suspicious about people around his home.

On March 22, the sheriff came to a home on CR 2130 to talk to the residents about Mark’s disappearance, but the people would not come out of the house.

When they finally did come out, one of the three people turned out to be Joseph “JoJo” Brunson who was wanted for a felon.  The other two, a female and a male are also felons but not wanted by law enforcement.  The place was next door to where Kevin Boney lived (see below).  The three people that lived there refused to come out, but after a couple of hours, Brunson, did and was arrested on an outstanding warrant.

Deputies said they questioned the man they went to the trailer to speak to, and that man led them to important evidence in Rhineberger’s disappearance. Investigators said they recovered Rhineburger’s cellular phone and some of his clothing near the trailer.

UPDATE:  On February  14 (date corrected per comment below- which led to more updates on this story), 2012, the police came to a home on CR 2130 in Romayor over a domestic dispute which lead to a standoff.  Kevin Boney, 34, had shot at his wife.  Boney was wearing body armor and armed with a high-power rifle and the SWAT team was called in and he surrendered.  Boney said he was Texas Militia.

Mark was driving a 2005, white 4-door Chevy pickup with a crew cab.  His truck was found on February 15, near County road 2148 in Liberty County near Romayor, Texas, near a trailer where police later went back to talk to the residents.  It was out of gas and had crashed into a dilapidated home near the Trinity River Bridge on FM 787 about a half-mile from CR 2148 in Romayor. Police are not sure if Mark had actually was the one driving the vehicle.

Six weeks later, Rhineburger’s jacket with his cellphone in the pocket was found a few miles away near a remote gravel pit, authorities said.  His daughter, Amanda, said when she last spoke to her father, he said he was meeting someone on his birthday, according to the Chron.