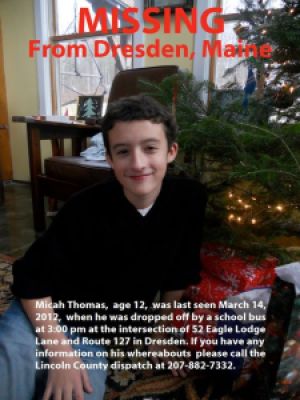 UPDATE: Micah has been found safe in a smelt shack along the Eastern River in Dresden.

Officials say he is suffering from a mild case of hypothermia, but is in otherwise good shape.

Peter Thomas, Micah’s dad reported him missing around 3:40 p.m., when Micah did not come home from school.

The Maine Warden Service began searching the neighborhood and a neighbor reported seeing a child at East Pittston Road around 4:00 p.m.  Searchers went to the area and  discovered footprints in the snow that they believe belong to Micah.

Michah is 5’3″ tall, 90 pounds and was wearing LL Bean boots, blue jeans and a blue Aeropostale hooded sweatshirt.  He was also carrying a red and gray backpack.