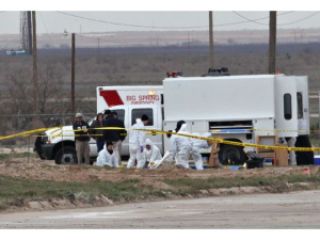 Update:  The remains found in Big Spring are not those of Hailey Dunn.

The medical examiner stated on Friday, March 23, 2012, that the remains are those of a male.

Some new information has come out regarding the remains at Big Spring.

Billy Dunn was notified on Tuesday the day the remains were found by law enforcement.

The remains were found by workers at Desert Tanks, a steel oil tank manufacturing facility.  The workers were sandblasting the tank when the remains became partially uncovered.  The cause may be from heavy rain they had on Monday.

The land was leased by American Limestone in December 2010 and they never locked the gates.

The Howard County Justice of the Peace said he saw a skull with hair at the scene.

The remains were inside a plastic bag and there were also deteriorating clothing.

As we wait to hear who the remains belong to, the police reported there are two other people missing from Big Spring.

One is William Arlin Bynum, 40,  who went missing in 2003 on August 15, 2003.  He was last seen with someone else leaving the San Franciscan Bar and Grill in downtown Big Spring.

The other is Bobby Marquez, Jr. 29. He was last seen at a friend’s house in the north part of the city of Big Spring.