UPDATE:  5/29/15 – Eric’s remains were found during an excavation at a construction site at 40th Street West near the Fourth Avenue West corner on May 21, 2015.  He has been missing for three years.
The body was “relatively intact” and found in the crouched upright position near an underground utility pipeline, according to a statement sent at 8:35 p.m. Friday, according to statements from Dickins 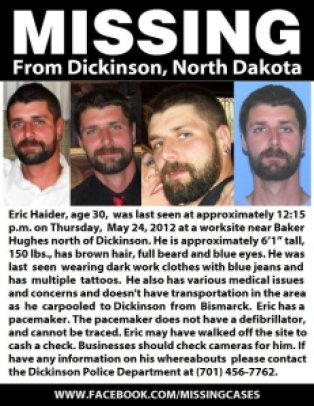 on Police Capt. Joe Cianni.  It took most of the day to exhumed the body which was taken to the forensics lab.  The body was transferred to the University of North Dakota forensics lab for testing.

A positive identification was made on Friday, but his cause of death has not been determined, according to the police.

On his missing Facebook page it stated:  “At this time in our lives we want to THANK EVERYONE for all your prayers, thoughts, support and all other kind full acts, you will never know how much you have touched our hears…..We also would like to ask you to please continue to pray as Eric’s case is an open ongoing investigation. Please do not believe everything you read and hear it is merely media speculation, we will comment as we can, here and only from us…..Thank you! ~Maryellen~ (Eric’s mom)”

Original Story:  Eric Haider, 30, was last seen around 12:15 p.m., on May 24, 2012 on the east side of the Baker Hughes at the Cofell’s plumbing work site in north Dickinson in North Dakota.

Jody Hewson of Lincoln reported him missing.  She said she last talked to him around noon on Thursday.  Eric’s mother said she had dropped him off at work that day.

It is believed that Eric left Baker Hughes to cash a check.  Eric did not have a car and he left his belongings at work.