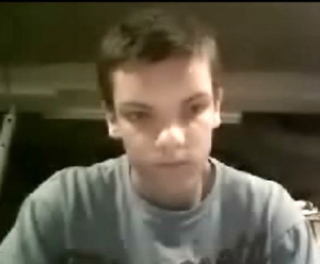 A boy who U.S. Immigration and Customs Enforcement (ICE) has been asking the public to help find has been successfully rescued on June 25, 2012 and they released the info on Thursday.

The information that was received on the HCI tip line was what identified the boy.

With little more than a video photo that was approximately 15 months old,  people spent hours searching missing children photos to try and determine who the boy was.  Tips began pouring in almost immediately after the photo was released which led to the identification of the boy.

Although the public would very much like to know who the child was, due to the ages of the individuals involved and the sensitive nature of this on-going investigation, no further information was released.

However, state-level charges are anticipated in this matter.

UPDATE:  Here is a second photo with the shirt that says Minnesota.

UPDATE:  Is there a match with Taylor Druyor below?  Authorities have been notified.  What do you think?  Taylor is 18 now.

AND this photo below of Tyler Schladweiler, below.  Is it a match?  Same wide set eyes and eye color.  Tyle would be 13 now.

UPDATE: The authorities said they received the video through a lead in another case and the video may be up to two years old, but more than likely a year and a half.  The boy could be between the ages of 13 and 19 years old.

The authorities have stated they believe the boy is sitting in a basement.  He is wearing a grey Minnesota Twins baseball t-shirt circa July 2010.  The logo is faded from washing.

“It is entirely possible this young man is not currently in Minnesota or Wisconsin, but has either a friend or relative in the area, or recently moved from one of those states,” said Neudauer.

The authorities are trying to identify this boy and they say he needs help and is danger.

This boy looks to me to be 13-years-old from the front and maybe 15 years old from the side. He also has brown eyes and they are set wide apart. I do not see a widows peak like what Kyron Horman has, so I do not believe it is him. Please note the grey shirt shows some letters on the end, are they O T A as in Minnesota? The bracket in the background, I do not recognize, do you? Is he in the basement of a house, a trailer? Could this boy be a missing person and has been missing for a while? So many questions. One more….what do you think?

June 19, 2012 Homeland Security Investigations released a picture of a person who agents believe could be living in Minnesota or western Wisconsin. They’re concerned about his welfare. They don’t know who he is or how old he is but a spokesperson says they know enough about him that they believe multiple young people could be removed from a dangerous environment if he can be identified.

HSI, which is known for investigating cyber-crime for U.S. Immigration and Customs Enforcement (ICE), did not elaborate on that statement, but the spokesperson said they know an adult is involved in the case and there is an online video that’s also part of the investigation.

Federal officials released photos of someone who appears to be a boy or young man Tuesday, June 19, and asked for help to identify him, saying he “may need law enforcement assistance, but may not be able to request it.” The person might now live, or have previously lived, in Minnesota or Western Wisconsin, according to U.S. Immigration and Customs Enforcement. The agency’s Homeland Security Investigations “is urgently seeking the public’s help to identify the pictured individual,” a press statement said.

Tips will remain anonymous, ICE said. Anyone with information is asked to call the ICE Tip Line, which is staffed 24 hours a day, at 866-347-2423. Locally, people can also call Homeland Security Investigations at 952-853-2690 and selection option 1 and then option 4 to leave a message for the duty agent.

Tips can be emailed to SPMduty@ice.dhs.gov or submitted online at http://ice.gov/tips/