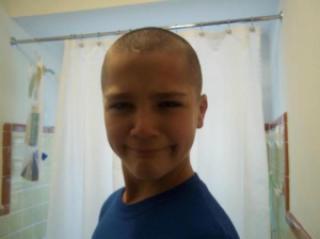 UPDATE:  St. Louis County police say the body of Christopher Marks, of Affton, was recovered Tuesday afternoon about six miles downstream from where the search began, reports the Sacramento Bee.

Original story:  A mystery surrounds the disappearance of 12-year-old Christopher Marks, from Affton who was swimming in the Meramec River in the Pacific Palisades Conservative on Sunday evening.  One minute he was playing on a rope swing in the river and the next he was gone.

Shortly before Christopher disappeared two men were seen at the river and the family said it looked as though they were “casing the area.”

During a mid morning search on Monday, a Chapstick that Christopher’s aunt says belong to him was found about 1/4 mile from the river, which led to the belief that Christopher was lost in the woods, instead of in the water.  The family recognized the Chapstick as one that was purchased at a  fundraiser, according to Fox 2 news.

Katie Marks, Christopher’s older sister  showed officers a small beach along the river where she last saw her brother.  She told St. Louis Today that Christopher waded into the river about up to his waist and was trying to persuade friends and siblings to try out a rope swing across the water.  She said moments after they told him they would rather stay on the beach, he vanished. She said Chris had had a little beer, but “it wasn’t much.”

“It sucks being the last one to see him,” she said. “I can’t cry anymore. I don’t have anymore tears.”

The St. Louis County Police and other rescuers are continuing to search along the Meramec River near Pacific.  Donna Sherman, Christopher’s great-aunt, said they were told by police they do not believe Christopher’s body is in the water in the immediate area of the river.  Divers were sent into the water on Monday to search, but nothing has been found.

FOX 2 was told my Christopher’s sister that Christopher had taken a couple of sips of beer. His mother says there is no reason to believe he ran away. He was only wearing blue gym shorts at the time he vanished. He did not have any shoes on and did not have his cell phone with him.

A corporate donor who wishes to remain anonymous is offering a $5,000 reward for any information that helps find Christopher.