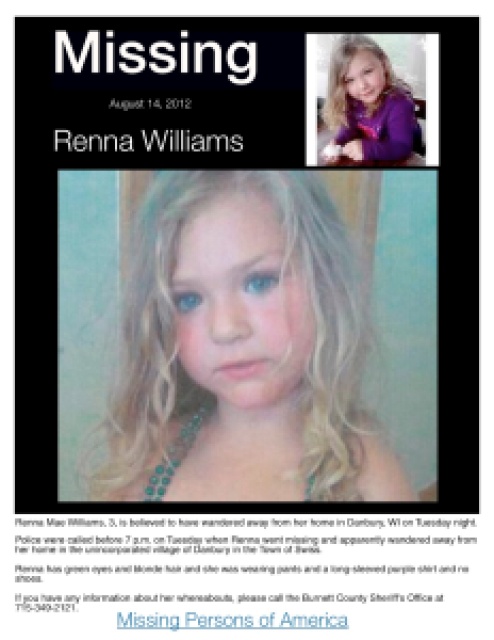 UPDATE:  Burnett County Sheriff Dean Roland says around 4:50 p.m. Wednesday dive team members found the body of Renna Williams in a shallow canal about 25 yards from her home in Danbury.

Renna Mae Williams, 3, is believed to have wandered away from her home in Danbury, WI on Tuesday night.

Police were called before 7 p.m. on Tuesday that Renna was missing and apparently wandered away from her home in the unincorporated village of Danbury in the Town of Swiss, which about 60 miles south of the Twin Ports  near Duluth, Minn.

Reena’s mother, Jenna Danish, said her daughter loves to go fishing and play outside. She said it’s normal for her to play outside, but she never wanders off.

“I came outside, I called for her, and the dog she had been playing with all day came up from the river and she was nowhere to be found,” Danish said, describing the moment Tuesday night she realized her daughter was missing. “Where she went, the dog went. Wherever the dog went, she went.”

Volunteers and authorities have continued their search for her today and have focused on a one square mile area near her home.  Her home is on an island near the Yellow River which you can only get to by crossing bridges.

Renna has green eyes and blonde hair and she was wearing pants and a long-sleeved purple shirt and no shoes.

If you would like to volunteer to search, gather at the ballpark near 3rd Street and Peet.

If you have any information about her, please call the Burnett County Sheriff’s Office at 715-349-2121.