UPDATE:  Gensham police said they have located the body of Whitney Heichel and arrested a suspect in her killing.  Police Chief Craig Junginger identified the suspect as Jonathan Holt of Gresham, an acquaintance of the Heichel family.

UPDATE:  Police say children playing outside an apartment complex have found the cellphone of an Oregon woman who vanished three days ago under suspicious circumstances, reports Fox News. The phone was found between the Walmart and gas station in a field near a walking trail.  The cellphone contained text messages asking where she was and if she was OK, Gresham Police said Friday. Police didn’t say who sent them or whether there was a response.

Previous story: During a search in a wooded area for a missing Oregon woman authorities found broken glass and tire marks on Thursday. There is no word yet if it is connected.

Whitney Heichel, 21, who lives on the 700 block of Southeast Highway 26 in Gresham, Ore. has been reported missing when she never arrived at her job at Starbucks in East Gresham on Tuesday. Her job is only a few minutes from work. Her boss called Whitney’s husband, Clint Heichel, that morning and asked him where Whitney was, reports KATU News.
“About 8:15 her boss called me and said, ‘Hey, I was just curious, did Whitney decide to be sick or not feeling well? Have you seen her or talked to her,'” said Clint. Clint tried calling and texting her several times and after he could not reach her, he called 911 to report her missing. 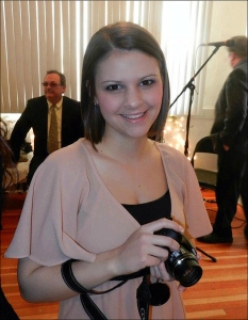 Whitney’s black 1999 Ford Explorer was found by friends that same afternoon in the parking lot of the Wood Village Walmart, when they were passing out missing person fliers. The passenger side window had been smashed.