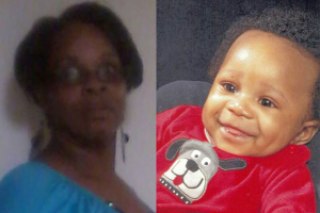 UPDATE 11/3/12 Shane and Vickie have been located and are find.  Shane is now with his mother.  Simon stated that she was unaware that she was unreachable by Shane’s mother and family members.

Charges will not be filed against Simon in connection to Shane Howard missing status as he was always in her presence and he was never in any danger.

Previous story:
Shane Howard, who is one-year-old, is missing from his home at the 4700 block of South Court Street in Montgomery, Alabama.

He is believed to be in the company of Vickie Simon, 45, who was watching him.

They may be traveling in a yellow 2002 Chevrolet Monte Carlo LS.