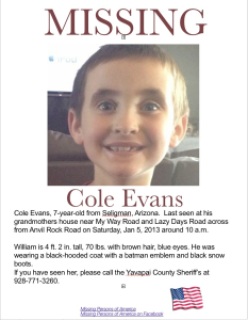 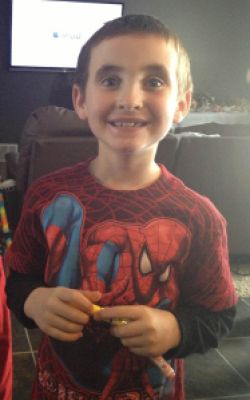 UPDATE:  1/6/13 – Cole has been found safe. The Yavapai County Sheriff’s Office said Evans had spent the night sleeping under an abandoned trailer.

Evans is said to like police, and when he heard authorities looking for him he emerged from his hiding place.

Per the Prescott News:  ” At 11:45 AM today, 7-year-old Cole Evans was located approximately 1.5 miles from his grandmother’s home. Cole was found by two Seligman residents who volunteered their time this morning as part of the search effort. While driving and checking for potential hiding places, they spotted a young boy underneath a trailer. When they stopped to investigate, the boy came running towards them and both recognized Cole immediately.”

UPDATE:  1/6/13 – The Yavapai County Sheriffs Office released a statement asking for anyone who saw a  man carrying a bow and standing next to a blue ½ ton pick-up truck with a boy who had dark hair and a black jacket tied around his waist to call the sheriff’s office.  The man and boy were seen off Anvil Rock Road around 11 a.m.

The Yavapai County Sheriff’s Office is asking for the public’s help finding a young boy who went missing on Saturday morning in Seligman, Arizona.

Cole Evans was last seen around 10 a.m. in his grandmother’s Seligman home in the area of My Way Road and Lazy Days Road.  Cole may have walked off the property.

Evans is 4 feet 2 inches tall and weighs 70 pounds. He has brown hair, blue eyes, and was last seen wearing a black hooded coat with a Batman emblem. He may also be wearing black snow boots.  Anyone with any information is being asked to contact 9-1-1.

One thought on “Cole Evans: 7-year-old missing from Arizona Found”