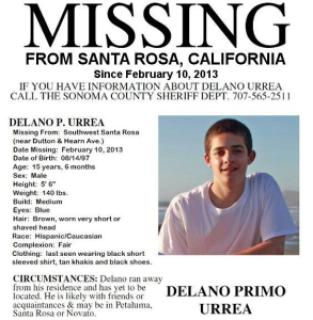 UPDATE 2/17/13 – Delano has been found safe in Santa Rosa Saturday. “Help Find Delano Urrea” reported shortly after noon Saturday that the teen had been found in Santa Rosa.

Delano Urrea, 15, is missing from Southwest Santa Rosa.  He was last seen 2/10/13.  He ran away from his residence and is misisng.  He may be with friends in Petaluma, Santa Rosa or Navato.