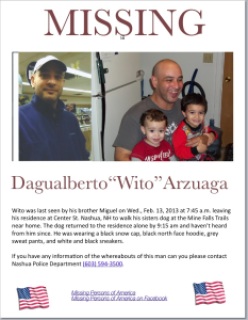 5/4/13 – The remains of Dagualberto were found in the Nashua River a few weeks ago. Investigators suspected the body was Arzuaga’s, who had been reported missing since February, but they waited to confirm his identity before announcing it last week.

Police haven’t yet determined what led to his death, but it isn’t considered suspicious.
Dagualberto “Wito” Arzuaga, 43, 6’2″ tall  is missing from Nashua, New Hampshire. He went to walk his sister’s dog at the Mine Falls Trails on Feb. 13 and the dog returned around 9:15 a.m. alone.  Wito is still missing.