UPDATE 3/5/2013 – Artistic has been found by police with his mother along with his two brothers.  No charges have been filed by the police. 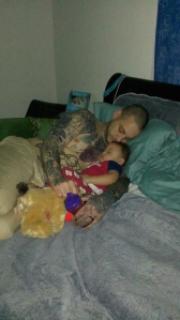 The search continues for a missing  baby that the parents say was abused by the childcare that was taking care of him.

According to the parents of Artistic Fletcher, 1, who lives in Kankakee, Ill. had marks on his body when he was  picked up by his father from the childcare on Wednesday night.

The parents took photos of Artistic and put them up on Facebook, with an explanation that Artistic had been harmed by the childcare, Jesus Lil Angel’s.

The post read:  ‘Jesus’ Lil’ Angels group daycare home will hurt your children.”
The post claimed that Artistic had black and blue hand prints across his whole butt, a diaper rash that caused his skin to peel and feces on his butt.  They also claimed that on the 21st, Artistic came home with a black ear and black eye and “[they] said my 4 year old “accidentally” got 2 rough with him but upon closer inspection 2nite noticed they were finger marks across his face. Adult size.  I was just over there with the cops and my son is in the emergency room right now begin looked at.”

Then while Artistic was being looked at by the hospital, Fletcher took Artistic and left and they have not been seen since.

The police have not been able to contact the family about what happened and currently have Artistic listed as missing and endangered. Click here to read the rest of the story.