UPDATE 4/9/13 –  Crimestoppers announced the reward for information on the whereabouts of Terrilyn Monette has increased to $19,600.

UPDATE 3/24/13 – Police want to talk to a jogger that has been seen on a surveillance video.

“If anyone knows who that jogger was, or if you were jogging in City Park that morning, please come forward. Maybe that person saw something that can help the investigation,” Lt. Christopher Kalka told ABC affiliate WGNO News.

UPDATE 3/18/13 – Police say surveillance video shows Terrilynn Monette driving alone in her car when she left a bar around 5:15a.m. on the day she was last seen, CBS affiliate WWLTV reports.
Three red light cameras show Monette leaving Parlay’s Lounge and heading towards City Park in her car and she was alone.

On Saturday, 3/9/13 –  I have been checking back on this mysterious case, and my belief is that Terrilynn may be found in the water, possible in Bayou St Johns.  Looking at the map of the route that she traveled, and the fact that her vehicle is still missing, leads me to believe that she may have gone off the road into the water.  I hope the search party today is looking for signs of a car going off the road. (The red E is the bar where Terrilynn was at.) 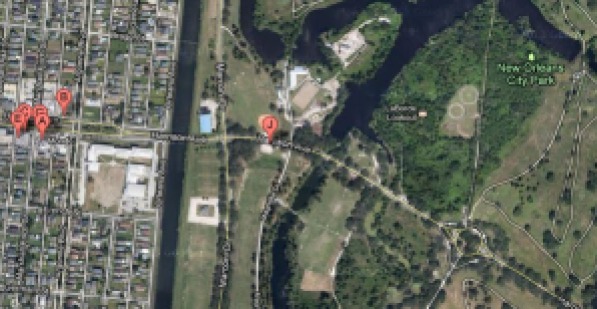 According to some comments left on Fox 8 Alive, five days ago, Terrilynn went to meet up with her friends and also has some friends in a band called Kinfolk Brass.

UPDATE:  3/8/13 –  The person last seen with Terrilyn has been identified and was interviewed by detectives. Also, surveillance video from that evening has been reviewed, but police won’t comment on the contents because of the ongoing investigation.

Police said they do not believe that Monette ever made it back to her apartment.

There is a rumor that Terrilynn was abducted by the Russian Mafia.  Read that story by clicking here.

Employees say she’d just finished a night of heavy drinking with several friends; when she and a male acquaintance walked out and sat inside her car, reports WGNO News.

“She went out to the parking lot with one of her friends,” said Parlay General Manager Anna Boudousque. “They were talking; they were there for a little while.”
“They left separate.  He went one way she went another.”

Police said Tuesday that they had not yet found the man who may have been in the car with Monette on the morning of her disappearance.