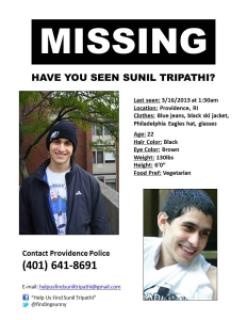 UPDATE: 4/25/13 – Sunil has been confirmed dead on Thursday.  Officials confirmed through dental records that it was 22-year-old Sunil Tripathi.

Donnelly says the body was found Tuesday floating in the river by the coach of Brown’s rowing team.

Identity of the remains will be made by the medical examiner.

A guess by a user on the website Reddit stating they believed that the Boston Marathon bomber was Sunil has proven to be false.

Allegedly, Sunil’s name was also stated on the Boston Police Dept. comm and heard on scanners.  This has never been proven to have occurred.

You can share your support for the family and help spread the word he is still missing by sharing this story or going to Sunil’s “Help Us Find Sunil” Facebook page.

The search, which has been spearheaded by the Providence Police Department and the Brown University Department of Public Safety, has now expanded to Boston, Connecticut, New York and Philadelphia, according to a statement from the school.

Previous story:  Sunil Tripathi, a student at Brown University has been missing since Friday from his home at 204 Angell Street in Providence, Rhode Island.

Police have said they are concerned for Tripathi’s safety.

Anyone with information is urged to notify the Providence Police Department immediately.