Please note the most recent info is at the top of this article.  Go towards the bottom of the article to Previous story to start from the beginning.

UPDATE:  In May 16, 2018, the jury found Willis guilty of Heeringa’s kidnapping and murder.  He received a life sentence without parole.  Herringa’s body has not been found.

UPDATE:  On November 27, 2017, Bluhm pleaded no contest to having been an accessory after the fact by helping Willis dispose of Heeringa’s body.  He was sentenced to time served plus five years’ probation.

UPDATE:  On November 2, 2017, Willis was found guilty of the 2014 murder of Rebekah Sue Bletsch and he received the mandatory sentence of life imprisonment without the possibility of parole.[14]

UPDATE:  Willis is scheduled to begin trial Oct. 17 for the death of Rebekah Bletsch. He’s also charged in the murder and disappearance of Jessica Heeringa in 2013, and for the abduction of a teen last year. He is also a suspect in the unsolved murder of a 15-year-old girl that occurred in 1996.  Willis’ cousin, Kevin Bluhm pleaded guilty to lying to police during the Heeringa investigation and during the 2014 murder investigation. Bluhm is awaiting trial for a charge of accessory after the fact for helping Willis dispose of Heeringa’s body. 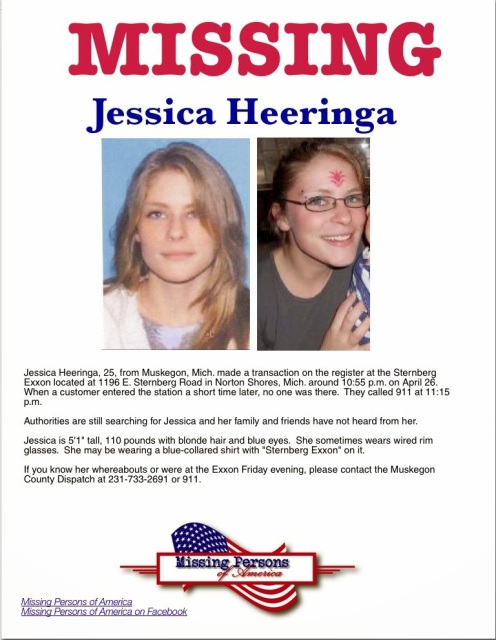 UPDATE 8/28/16 –According to WSJM news, Kevin Bluhm, 47, has pleaded guilty to lying to police about the disappearance of Jessica. Bluhm is the cousin of Jeffrey Willis, Bluhm told police Willis was responsible, but later told police he made it up. He will be sentenced in September.

UPDATE 6/17/16 –  WOOD-TV reports the police went to Jeffrey Willis’ home and searched an abandoned rail bed for the body of Jessica.  Nothing was found.

UPDATE 5/21/16 – Has the case of missing Jessica Herringa been solved?  Well, according to Muskegon County Sheriff Dean Roesler, it has.    Yesterday he told News Channel 10:  “The development in that case have led us in the direction to potentially close two other very serious cases, being the Rebekah Bletsch murder (Rebekah was shot and killed while she was jogging near her home on Automobile Road in Dalton Township), a Muskegon County Sheriff’s Office case, and the Jessica Heeringa case out of Norton Shores.”

Law enforcement will rarely make statements like this unless they are sure, and there must be much more that the police know they have not let out to the public at this time.

Is it possible in  one of the photographs is Jessica and that is why the Muskegon Sheriff is saying Jessica’s case is  “potentially” closed?

Will there be other cases that will be tied back to Willis?

UPDATE 5/18/16 – The police are searching a home belonging to Pam Willis who is related to Jeffrey Willis, 46, that was arrested on May 17, for an attempted abduction of a teen girl in April.  Willis lives in the 1800 block of S. Sheridan Drive in Muskegon Township.  WZZM is reporting that a neighbor called the Jessica Hearing tip line after news broke of Willis’ arrest.  The police showed up today and are searching the home on the 3000 block of Bailey Street. The abandoned home apparently had belonged to Willis’ deceased grandfather who passed away in 2011, and Willis was known to frequent there.  The police have not stated the search is related to the Hearing case. 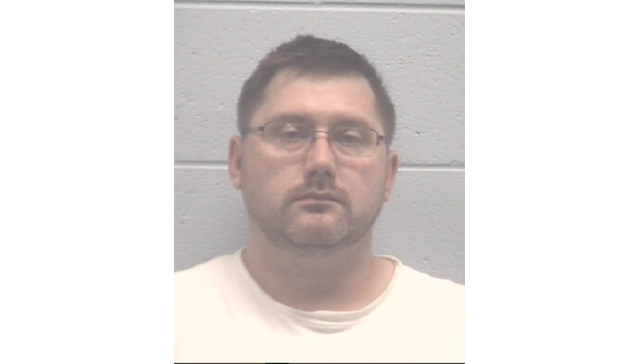 Update 4/7/16 –  Jessica’s case will be shown on Disappeared on the Investigative Discovery channel on Monday.

Brad Mason as being a possible person that had to do with Jessica’s disappearance is a name that comes up frequently.  The family expresses they hear this all the time, but according to the family, there is no connection.  When someone posts the connection between Brad and Jessica, the Find Jessica Heeringa Facebook page posted:

Also, the last I read the police to not consider him a person of interest.

Lt. Kasher the detective assigned to stated in October 2015 that he executed a search warrant at Mason’s home and nothing resulted.

UPDATE 7/16/14 – Jessica’s fiance, Dakotah Wakan Quail-Dyer, 30, was arraigned in Muskegon County 60th District Court Thursday, June 19, on three counts of controlled substance delivery/manufacturing, marijuana, a felony.  A judge set a $20,000 cash or surety bond for each charge.  Dakotah is also the father of Jessica’s son, Zevyn. He has had permanent custody of Zevyn as of May 29, but today Jessica’s sister, Samantha Heeringa, who was granted visitation rights, is asking for temporary custody of him.  According to WZZM news, Samantha’s petition for temporary custody states the boy is staying with Dakotah’s father and step-mother, neither of whom have custodial or guardian rights over the child.

According to court documents, he is accused of the drug activity in March and was arrested on June 18 by the Michigan State Police.

The Norton Police Department has released a timeline on April 26, 2013.  What you will notice is there is a lot of silver van’s mentioned.  Are they all different or the same?

UPDATE 6/3/13 – The Norton Shores Police are squelching the rumor started on social media that stated Jessica has been found.  She is still missing.

DNA testing showed a small amount of blood found outside the gas station belonged to Heeringa, Norton Shores police Chief Daniel Shaw said they believed she could still be alive.

A video released by the Norton Shores Police Department on May 1, 2013. The video, taken from Coin Zone on Grand Haven Road, shows the suspected silver minivan that is believed to be involved with the disappearance of Jessica Heeringa. The vehicle of interest is the second vehicle in the frame.

UPDATE:  5/1/13 – Police have released a sketch of someone that feel may be responsible for Jessica’s disappearance:

UPDATE 4/29/13 – The Norton Shores Police Department has surveillance video of the suspect’s van in the missing mom case the night of the abduction at 11:15 p.m. Friday night and it is believe to be a silver Chrysler mini-van town and country.

Dispatcher: Muskegon 911. Where is your emergency?
Caller: Um. I don’t know if it’s an emergency. I just got out of work. I’m at the Exxon station on Sternberg Road. There’s nobody here.  It wouldn’t allow me to pump gas. I just walked inside, there’s nobody. There’s a car here. There’s another car out front. But it’s just very suspicious why there’s nobody here.
Dispatcher: Did you yell or anything?
Caller: Yeah, I hollered ‘hey’ and walked around the building. I don’t know.
Dispatcher: It’s still open, right?
Caller: Yeah, when you walk in, the bell goes ding, ding, ding. The cashier is supposed to be there, but I don’t see anyone.
Caller: It just seems strange. I come here after work. I come here all the time for gas.
Caller: I’d hate to see anyone come in and grab and run, you know.
Dispatcher: If you feel comfortable staying there, I do have an officer notified.
Caller: I’m just concerned that somebody’s hurt.

Wow, have you heard the gas station owner talk when he is on the news. He comes across unbelievable and aggressive. Supposedly, LE asked him to install cameras at the gas station and he never did, although in all fairness he told WOOD-TV “That never happened.”

People are also talking about the fact he may have put up a craigslist ad for someone to replace Jessica within 24 hours after she went missing.  .

No confirmation that this was posted by the owner of the gas station.

Shelly talks about her daughter and how she thinks she went to help someone that asked for help, which is a good theory as this is the most common way that women get abducted, as they do respond when someone asks them for help.

Dakota Quail-Dyer, Jessica’s fiance and the father of her son, told 24 Hour News 8 Saturday that he talked to her an hour before she disappeared. He said she was looking forward to coming home.

UPDATE 4/29/13 –  The town is pulling together for Jessica.  “Candlelight vigil is scheduled for Tuesday night at 6pm. Hal Pearson will lead us in a prayer for Jessica’s safe return. Location is at the Points Mall on Sternburg by the Exxon gas station.”

Is this the van?  Has it been there before?

“I’m doing better today than I was yesterday. It feels good to be out,” Shelly Heeringa said. “Yesterday, I didn’t want to do anything. This scenario kept playing in my mind, so it’s good to be out here and see support.”

A few people have shown up to pick up fliers and spread the word, but more needs to be done.  More support is needed for Shelly.  Please show your support and stand by Shelly as she passes out flyer’s and help keep Jessica’s story out in the media.  Please join Shelly, and lend your support even if it’s only for a few hours.

The Norton Shores Police Dept. have confirmed that there were no security cameras operating at the gas station at the time of the alleged abduction, reports Michigan Live.

Derek Antol said he is offering $500 for any information that would lead up to an arrest.

“I would hope if it was my kid people would show up here to support me,” Antol added. “I am very surprised that people aren’t here.”

Come on Muskegon, give Shelly support.

Previous story: An employee that worked at the Exxon Mobil gas station in Norton Shores went missing during her shift on Friday night.

Jessica Heeringa, 25, from Muskegon, Mich. made a transaction on the register at the Exxon station on 1196 E. Sternberg Road in Norton Shores, Mich around 10:55 p.m. on April 26.  When a customer entered the station short after there was no one there.  The customer called 911 at 11:15.  According to the Exxon Stations website, the Sternberg Exxon is open till 11:30 p.m. on Friday nights.

Authorities called her family and friends and no one had seen her.  By Saturday afternoon she still had not been located, reports Michigan Live.

Jessica left her belongings behind at the station at the family is afraid she may have been kidnapped.

“My beautiful granddaughter was kidnapped from her place of employment last night in Muskegon.  Please, please help us find her,” posted Diane Homrich on Facebook. “We need to find her, she has a little boy who needs her.  Please help.”

Jessica is 5’1″ tall, 110 pounds with blonde hair and blue eyes.  She sometimes wears wired rim glasses.  She may be wearing a blue-collared shirt with “Sternberg Exxon” on it.

If you know her whereabouts or were at the Exxon Friday evening, please contact the Silent Observer at 231-72-7463.