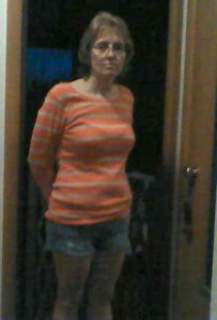 UPDATE 5/13/13 – The Lincoln County sheriff’s office has confirmed that the body found last week is that of Anita Bucki. Authorities have a man in custody in connection with Bucki’s death.

Previous Story:  Anita Bucki, 48 is missing from Lincoln County, Town of Corning, Wis. She was last seen  around  5 a.m. Friday.

“We are treating this as a missing persons case,” Lincoln County Sheriff’s Lt. Mark Gartmann said Monday. “We are very actively looking for (Anita Bucki) at this time.”

Mark Bucki, 49, Anita’s husband called police Friday night to report his wife missing, according to a news release issued Monday by the Lincoln County Sheriff’s Department.  Mark Bucki told investigators the couple had stayed up late talking, and he went to bed alone.   He said when he woke up around 5 a.m., his wife was gone, the news release said.

According to a Lincoln County Sheriff’s official, authorities searched on ground and from the air Friday night but found no clues to Anita Bucki’s whereabouts.

“We’re doing everything we can to find Ms. Bucki,” Gartmann said. “Every lead, every tip is followed up on. We want the public to keep calling in tips, 24 hours a day.”

Police stated there is no indication as to where she went. And she left all her personal belongings including her car, purse and cellphone at home.