November 8, 2018  The authorities will be going over the case of missing Ashley Summers and will be re-interviewing anyone that knew Ashley before 2007. According to News5, “Law enforcement officials now believe there may be two more areas of interest besides the location she may have last been seen, West 96th Street and Madison Avenue, according to a FBI news release. The two additional areas are the 1100 block of Holmden Avenue and the 3400 block of West 44th Street.”

UPDATE:  The FBI have released a photo of a woman who was at a Warwick ATM in October to see if the public can identify is she is a teen that went missing from Cleveland when she was only 14-years-old.  The photo taken from a surveillance video at the bank was released because the woman is also a suspect in a rash of ID thefts across Rhode Island. In the car with the unknown woman was a man, who is also unidentified and the FBI would like to talk with him also. Both are suspected of stealing wallets and purses from gyms in Warwick, then using stolen identities and checks to withdraw money from area banks, reports WPRI news.  Later the FBI determined it was not her.

When Ashley’s mother saw the photo in January she told the police it looked like her daughter who she has not seen over seven years. Click here to read more and see video. 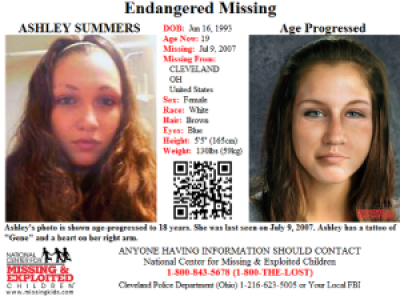 Ashley Summers, 14, went missing from Cleveland, Ohio in 2007.  She was last seen at her great uncle’s house 2100 block of west 96th Street, near Madison Avenue. She disappeared after an argument, taking all her clothes with her.  A month later, she called her mother to say she was okay and not to worry. In November of that year, she was labeled a runaway by the police and she has never been heard from since.

Ashley’s step-grandmother thought she saw Ashley in 2009.  Her hair was short and dyed-blonde but she was sure it was her.  FBI S/A Tornsey on the Oprah Show discounted her story by saying there has been “no legitimate sightings” of Ashley.

Ashley disappeared from the same area that  Amanda Berry and Gina DeJesus lived in.  Ashley also went to the same middle school as DeJesus.  Berry was last seen at the Burger King on @ 110th Street, DeJesus was last seen at @. 105th Street.  Both about 3 miles away from Ariel Castro’s house at 2207 Seymour Avenue were Amanda, Gina and Michelle were found on Tuesday, May 6.  Where Ashley was last seen at her Uncle’s, is less than a mile away from that house.

Barbara Knight, Michelle Knight’s mother also thought she had seen her daughter once a few years ago at a Cleveland shopping center, being pulled by the arm by an older man. She told the Plain Dealer that she yelled Michelle’s name, but the woman didn’t respond.

Ashley’s family continue to believe that Ashley is still alive.  We hope that is true.  We can all help by keeping our eyes and ears open.

Ashley has a tattoo of “Gene” and a heart on her right arm.

I have a small favor to ask. More people are reading Missing Persons of America than ever and asking for their family member to be shared. I do it because I believe that every single missing person matters, and they all need equal attention. It can’t be done any quicker, and with less boundaries than social media. Last year, I was bombarded daily with more and more cases to share.  I found myself falling behind as I work 10 hours a day to feature missing people. Also, the network has grown so large that we are in need of an internet host that can serve the growth, so the website does not go down. Many don’t realize that Missing Persons of America independent, investigative posting takes a lot of time and hard work to produce. Frankly, I need funds. If everyone who reads this website, who likes it, can help, our future would be much more secure. For as little as $1, you can support Missing Persons of America and it only takes a minute. Thank you.