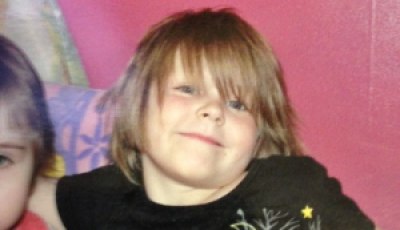 UPDATE:  7/26/13 – A man has been arrested for allegedly abducting Macey.  She suffered injuries during her ordeal that are too extreme to talk about here.  The police stated the man had been beaten up by unknown individuals when they found out what he had done.

UPDATE 7/26/13 – According to WBNS the mayor said that Macey Stewart was found in Liberty Township, about 6 or 7 miles from her home. She approached a home, and a woman who recognized her picture called authorities.

Previous story:
Macey Hannah Stewart, 6, is missing from Ohio.   She was last seen at 207 North Chestnut Street in Jackson County on Friday, July 26 around 2 a.m.

A statewide endangered missing child advisory has been issued.

A 16-year-old teen was watching Macey and police stated to 10tv news that the teen said they were sitting on the front porch and a man asked to use their phone.  The teen went inside to get it and when he returned Macey and the man were gone.   Macey’s father, Frank Stewart and her brother were not there as they had left to change a tire at a nearby gas station.

Another story is being reported by WSAZ that other family members said that Macey was on the porch with her father and the man that came to the home and asked to use the phone had been there previously to buy electronics from Frank.  Police have found the man and they are questioning him.

Macey’s father called 911 to report her missing.  Macey’s mother is currently incarcerated on an unrelated event.

Police have found the man who asked to use the phone and they are questioning him.

Macey is 3-feet tall and 50 pounds with blue eyes and should-length dirty blonde hair.  She was wearing a one-piece black bathing suit with a yellow flower on it and no shoes.

Anyone with information is asked to call the Jackson Police Department at 740-286-4131.