Kyron Horman: Updates on case and DeDe Spicher to answer questions from the grand jury 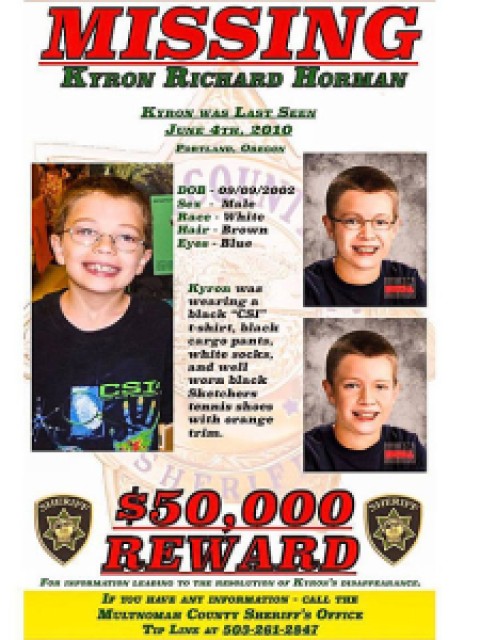 UPDATE May 18, 2017: “The Multnomah County District Attorney’s office continues to empanel and offer evidence before a grand jury for the Kyron Horman case, meaning both the criminal investigation and legal proceedings are underway,” wrote Matt Semritc, deputy district attorney for Clackamas County. “The Multnomah County District Attorney’s Office has confirmed that the grand jury has been convened on multiple occasions regarding the Kyron Horman case.”

Many people are reported on this information as new and possible leading to a pending arrest, but as you can see below this paragraph that nearly the same statement was released back in May 2015.

UPDATE:  On May 28, 2015 the authorities released a statement that said,  “A grand jury has received evidence in the case and is empaneled to hear available relevant testimony,” source Multnomah County Sheriff’s Office news release stated.  The statement seems a little ambiguous and I guess we’ll have to wait to see if anything comes of it.

UPDATE 6/4/14 – Desiree Horman says that Terri Horman “failed a lot of questions that they asked her,” and that she failed three polygraph tests, each nearly 10 hours long.

Desiree said that the police might be upset with her after she let this information out.

So, I hear today that DeDe Spicher is finally going to do some talking about the Kyron Horman case.  8-year-old Kyron disappeared on June 4, 2010.  Terri Mouton Horman was Kyron’s step mom and DeDe Spicher was Terri’s friend.

DeDe has talked to the grand jury some, but there were 142 questions (per anonymous) that was asked by Rosenthall regarding the 10 million dollar civil suit filed by Desiree Young that she would not answer and pleaded the 5th.

What we do know is at least two friends of Terri’s purchased cell phones after Kyron’s disappearance, reports KGW news.  KATU news reports that one of the friends was DeDe Spicher and that she purchased a prepaid cell phone at an electronic store at Lloyd Center with a fake name. During her grand jury testimony she said the phone was for herself and not for Terri.

Another friend of Terri’s who has not been identified, told the grand jury that there were three phones, one for herself, one for Terri and one for DeDe. The phones were purchased and were serviced by AT&T, because Verizon had no cell phone service at Terri’s home.

We also know that on June 4, 2010, Spicher was doing gardening work for a homeowner and left about 11:30 a.m., just before the homeowner, another person and DeDe were ready to sit down for lunch. The homeowner tried calling Spicher on her cell phone, but she didn’t answer.  DeDe returned to the house about an hour later.  When the courts asked DeDe about her actions that day, Spicher asserted her Fifth Amendment rights, at the advise of her attorney.

Desiree Young, Kyron’s mom had filed a $10 million lawsuit against Terri for custodial interference and intentional infliction of emotional distress, reports KGW News. but decided this week to dismiss it. Kaine Horman, Kyron’s father supported the lawsuit as long as it did not interfere with the criminal investigation, reports KATU news.

“Because my civil case cannot move forward without the police files, it is with great disappointment that I make this difficult decision,” said Desiree.  She also stated she feared her civil case could “get in the way of these goals.”

Evidently, we only have to wait a couple of weeks before DeDe Spicher will be in front of the grand jury after a new development.

“It’s my understanding that (Spicher) finally agreed to testify in front of the grand jury a week or two ago,” said Elden Rosenthal, Young’s attorney.

You can’t help but think the reason she did plead the 5th before probably had to do more with her saying something that would get her in a lot of trouble, and possibly even jail time, than her advise by her attorney or loyalty to Terri.  Is it possible that the Grand Jury and DeDe’s representative’s have done some bargaining to keep her out of jail in exchange for her  answering all those questions?

On Sept. 5, 2013 it was released that in an online article, Dede Spicher claimed she had passed a polygraph, signed an immunity deal with prosecutors, and agreed to tell all before the grand jury investigating the case.

Maybe Kyron’s parents and authorities will finally get some answers as to what happened to Kyron.

One thought on “Kyron Horman: Updates on case and DeDe Spicher to answer questions from the grand jury”