Zyion was found Monday morning and has been reunited with his family.  WNCN reports that he was found by the Durham Police at a home on Potter Street  around 4:30 a.m. , after a tip. Jasmine Johnson resided at that residence. Zyion’s mother was appreciative that the people at the home were taking care of him and keeping him safe.

Original story:  Durham, North Carolina police are searching for Zyion D’youate McCallum, 2, who was reported missing on around noon on Sunday.Authorities said they were called to the 1200 block of Morreene Road.  Zyion was last seen with a woman named Jasmine Johnson or Jasmine Jackson at the DATA terminal in downtown Durham on Saturday afternoon.  Zyion’s mother, Latara Robinson, said the boy was with his aunt who is a teen on Saturday and that the two were supposed to be going to a park, but Latara told her she took the boy to the Durham Area Transit Authority and left him with someone named Jazmine.

So far, there is no explanation as to why the teen aunt would do such a thing, but motivation could have been money or something happened to Zyion while in the aunt’s care and now she is covering up for it by saying she gave the little boy to someone or even as bad the aunt is lying for the mother. 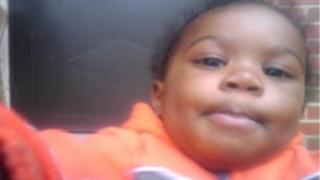 . The woman is described as being around 23 years old.
If you see them please call 911.

One thought on “Missing two-year-old Zyion from Durham FOUND”