Erica Lynn Parsons: Has not been seen in two years FOUND

February 20, 2018 – North Carolina authorities say Sandy and Casey Parsons are being charged with murder in the dead of their adoptive daughter, Erica Parsons.  They are currently in prison for fraud now.  A grand jury indicted them on charges of first-degree murder, felony child abuse, felony concealment of death and felony obstruction of justice.

In 2016 an autopsy done on Erica’s showed she had broken bones all over her body.

Please note that this story has updates and you will need to go to the bottom of the page to previous story to read the first entry.  Any new updates are shown with dates.

10/5/16 – We are now finding that authorities were able to find Erica Parsons after her father led them to the area in which she was buried.

9/29/16 – The authorities announced that the remains of Erica Parsons were found in the Pageland Mount Croghan area of Chesterfield County.

11/2/15 –  The person who now owns the property on Miller Chapel Road cut down a large tree on the property and found some bones.  The bones turned out to be not human.

7/19/15 – The $50,000 reward is still in place for information about the disappearance and whereabouts of Erica Lynn Parsons.

Casey Parsons, adoptive mother of missing teenager Erica Parsons, has been sent to a federal prison hospital in Texas to serve her sentence, after being sentenced in March 2015 to 10 years.  Casey cashed Erica’s assistant checks for over a year after she went missing. Sandy Parsons is serving an eight-year sentence at Butner Federal Correctional Institution north of Durham.

7/30/14 –  WGHP Fox news reported today that Sandy Parsons, 40, and Casey Parsons, 39, are being held under house arrest, from an indictment from Feb. 2010 to August 2013 that they have committed  tax fraud, mail fraud, theft of government funds, identity theft and engaged in a conspiracy to defraud the government. 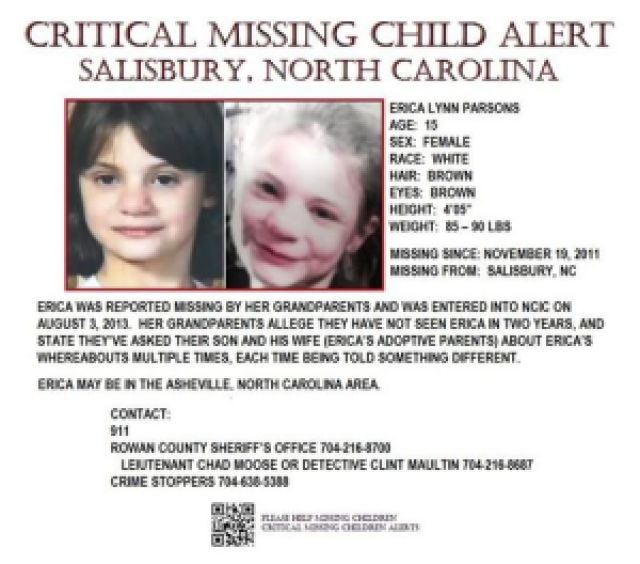 WGHP stated they were pretty angry when they left the court house and were yelling at the media to get out of the way.  The two will be back in court on Wednesday in U.S. District Court in Winston-Salem.

7/23/14 – Erica’s brother does a candid interview about his sister.

8/22/13 – A red wooden storage building located at the home on the 200 block of Miller Chapel Road was searched by authorities.  The building belongs to Erica Parson’s adoptive father, Sandy. The search warrant states that a hammer, pieces of a vacuum cleaner, a video tape, Erica’s school records and teeth were seized during the search.

8/21/13 –  Jack Trimarco, a former FBI polygraph examiner, gave Sandy Parsons a polygraph test.  He asked him: Did he deliberately cause Erica’s disappearance, and did he have a plan to cause her disappearance?

To learn more about polygraph tests, click here
and here and

Trimarco told Dr. Phil that, “He was what I consider strongly deceptive to both relevant questions.”

Trimarco did not give Casey a polygraph test because she said that she was in pain after surgery the week before.  Trimarco said pain can make the body’s response confused with deception.

8/14/13 – Search warrants issued at Erica’s home resulted in authorities seizing stained flooring and baseboard’s from the girl’s home.  They also found a book and magazines about JonBenet Ramsey, and two large knives covered with shrink-wrap. The warrants also said bank records show the Parsons continued to cash support payments for Erica’s care, but the Parsons responded that they continued to take the payments because Erica’s health insurance was tied to the payments.

Police said Casey Parsons was hospitalized at Wake Forest Baptist Medical Center in Winston-Salem to undergo emergency surgery for what he said were complications with a medical problem. There was no word on her condition from the hospital Thursday afternoon.

Authorities are searching for a missing Asheville teen two years after she was last seen. The North Carolina teen’s adoptive family didn’t report her missing because they thought she went to live with her birth family. Erica Lynn Parsons, 13, was reported missing on August 3, 2013, after her grandparents said they had not seen her in two years, and her adoptive family told them a different story every time they asked about her.

Back in November 2011, Erica’s mother called her adoptive parents and said she wanted Erica to come and stay with her and her relatives for a while, Carlyle Sherrill, the family’s attorney said.

Sherrill, said that two years ago, a person claiming to be a relative or friend of Erica’s birth parents came by the Parsons’ home on Miller Chapel Road to pick her up and take her to her family.  The adoptive parents said they did not raise an alarm at the time because Erica visited that person in Asheville on several occasions.

He went on to say that Erica call her adopted parents in February of 2012 and said she didn’t want to go back to live with them.

WBTV reported:  “Erica was adopted by the Parsonses as an infant, and the couple received monthly government assistance checks of $634 because Erica had hearing problems and a learning disability. Her biological mother had at one point been married to Sandy Parsons’ brother, but Erica’s father was another man.
In the February hearing, her adoptive brother James Parsons, 21, and other members of the Parsons family described a pattern of physical and emotional abuse directed at Erica, including testimony that Casey Parsons encouraged the family’s other children to abuse Erica from infancy.
James Parsons testified that he once broke Erica’s arm, and shortly afterward decided he could no longer participate in the abuse.
Erica was fed dog food by Casey Parsons as punishment for stealing food or sweets, was often beaten, was frequently locked in a closet and was made to stand in a corner rather than play with other children, family members testified.”
MissingPersonsOfAmerica

4 thoughts on “Erica Lynn Parsons: Has not been seen in two years FOUND”