Please note the updates on this story are on the top. Please scroll to the bottom to read the original story, and then read up. 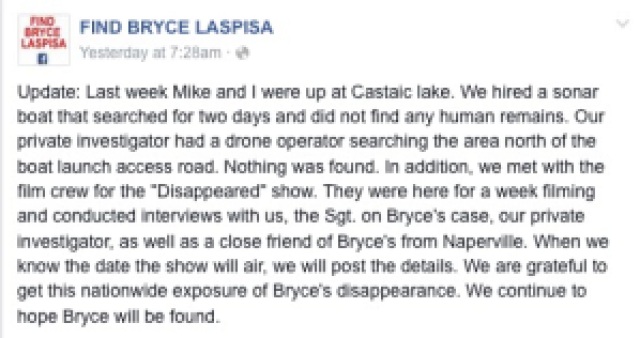 UPDATE:  7/15/15 – Bryce is still missing.  There have been reports of several homeless people in the Redlands area with red hair.  They were not Bryce.  The family has also checked several blood banks and he has never checked into any of them.  There is a $5,000 reward for information leading to his discovery.  Bryce has a distinctive large tattoo on his left shoulder.

UPDATE:  2/11/14 – On a blog that primarily talks about the McStay Family, the owner of the blog offered his help to family’s of the missing.  I do not know if the Laspisa family contacted him, but shortly after, there were accusations that were posted on the blog stated that Bryce knew Joey McStay’s brother, Michael.  There were also accusations that the family was using donations for things other than searching for Bryce.   (Please note this information was before the McStay family was found buried in the desert).

“A number of your statements are TOTALLY inaccurate. Less than 2000 was donated and it was used for a number of expenses including flyers, magnets, gas money, …
I am not Bryce’s stepfather , I adopted him when he was 2. I have discussed ALL the possible scenarios of why Bryce could have gone missing with anyone who asked.  We have used the services of 2 PIs and a number of psychics. We looked in many wash areas for the homeless and had volunteers go to the shelters. Bryce only had contact with Mike McStay twice while volunteering at Mercy Warehouse. He did not attend service there. I do NOT know that Bryce is alive.

Why did Rich Baker send an email to us offering to help and then publish this mostly made up set of “facts?” Rick Baker is seriously disturbed.”

It is hard to understand why Rick Baker offered to help and then turned on the Laspisa’s family, but this was his manner of operation on several other missing person cases and in particular the McStay family.  Rick Baker’s blog has been shut down. 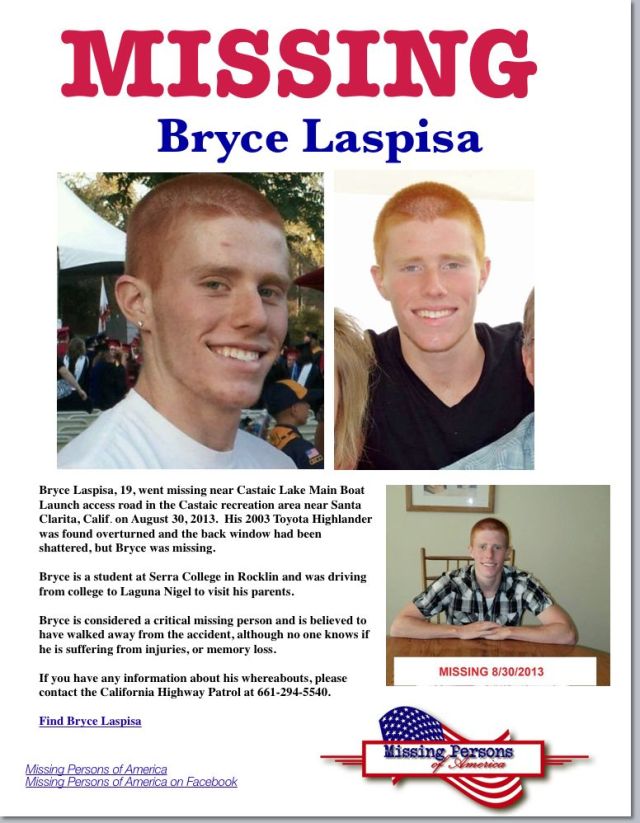 UPDATE 1/22/15 – Find Bryce Laspisa’s Facebook page is coming up with unconfirmed sightings of him.  Most of them have been in the California area.

In Jan, 2015, Derick Higgins was located in San Diego after he had been homeless and loss of memory for almost two years.  He was located by the Harbor Police who were suspicious of his actions and who asked his name.  They ran his name and found he was listed as an endangered person, and took him to the hospital and called his parents.  The family had a wonderful reunion with hugs all around.  Derick was happy to be home and happy to be found.  Is it possible that Bryce is in the same situation.  Wandering around not aware that there is a family searching for him.  Suffering from possible brain injury from the car accident?

“We need searchers for this weekends search in Castaic, Valencia and Santa Clarita areas. Volunteers DO NOT need to be experienced hikers, but need to be 18 or older and physically fit.  We are asking ALL volunteers (even if you have been helping for a long time) to sign-up at volunteerspot.com (link below) so we can get an approx. head count. We are also asking Everyone to print, fill out and bring with them the 2 forms (registration and release) that can be found in the photos section at the top of this page OR on the forms page of findbrycelaspisa.com
Thank You
Brian”

UPDATE 9/12/13 – Los Angeles County Sheriff’s Police Capt. Mike Parker said the burned body found was NOT Bryce, but was a South Los Angeles man, Lemondre Miles, who apparently was shot to death and his body set afire in a dispute over money.

Bryce’s mother has posted that there have been some sitings of Bryce and one person said he came in for some water and seemed confused.

Also, the families car was burglarized but it was determined to not be linked to Bryce’s case but a random act.

Sheriff’s Department officials have still not released any information whether the discovery of a burned body was related to the missing teen.

UPDATE 9/4/13  – Police were called to a brush fire around 6 a.m. Wednesday about three miles north of Lake Hughes Road by a cyclist. When fire crews arrived, they instead found a burning body.  There is some speculation the body could be Bryce but the medical examiner will need to determine the identity. (Body later identified as Lamondre Deon Miles).

Original Story:  August 30, 2013 – Parents of a missing teen are spending the Labor Day weekend searching for their son after his car was found at the bottom of a cliff.

Bryce Laspisa, 19, called his parents, Karen and Michael Laspisa around 2 a.m. on Friday and told them he was pulling off the I-5 in a suburban area because he was tired and going to sleep in his car.

Bryce had been traveling for several days after leaving  Sierra College in Rocklin which is north of Sacramento to drive home to Laguna Niguel on Wednesday night.

Authorities pieced together his journey and they do know that around 11:30 p.m. on Wednesday, that Bryce ran out of gas  on Thursday morning, and called for roadside assistance from the Buttonwillow Rest Area near Bakersfield.  The serviceman told authorities that Bryce looked okay but his eyes were red. After Bryce’s car was gassed up he stayed at the rest area for another 10 hours, but eventually drove to Lagoon Drive about five miles away, reports The Santa Clarita Signal.

Then on Thursday around 10:30 p.m., Bryce told his mom that he was going to hang with some friends.  He bought a drink from the Shell station in Buttonwillow on Thursday.  Friday he called his mom around 2 a.m.  That was the last phone call his parents received.

When the Laspisa’s didn’t hear from Bryce they contacted the police who located his 2003 Toyota Highlander SUV on the Castaic Lake Main Boat Launch access road.  Bryce’s cellphone, wallet and laptop were found in the vehicle along with some blood.  The back window was shattered with an emergency tool that was kept in the center console of the car.

Other information revealed that Bryce had told his mother he was breaking up with his girlfriend and that he had a lot he wanted to talk to her about.

A search for Bryce was conducted by helicopter, walking teams, dogs, an airplane and boat through the weekend.