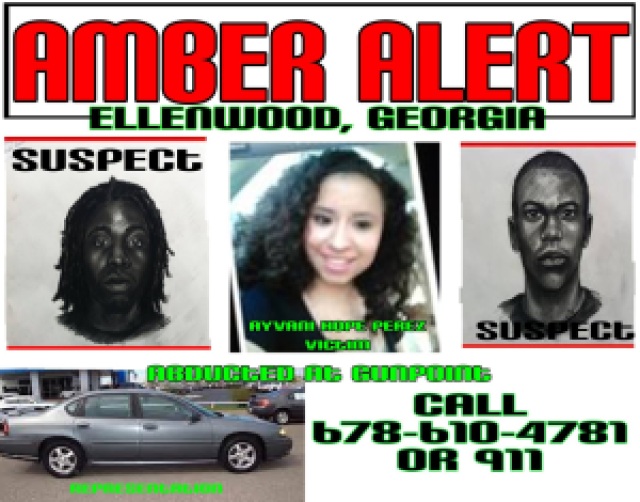 UPDATE 9/29/13 –  More information has come out regarding the kidnapping of 14-year-old Ayvani.

According to WSB, the FBI stated that Ayvani was blindfolded after she was abducted and kept at two different locations.

Although, Wildrego Jackson and Juan Alberto Contereas-Rodriguez were arrested, the two men that were on the sketch the police released shortly after Ayvani was taken are still at large.  The police state there were as many as six people involved in the kidnapping.

Over the period of Ayvani’s abduction, nine ransom calls were made.  The FBI was able to trace the calls back to Jackson.

During one of the phone calls the Perez’s family received a call from the kidnappers saying that they were going to return her to a Lowe’s store.  Then called back and said they were dropping her off at her aunt’s house in Conyers.

The FBI also said they have ID’d both men from the sketches but have not stated who they were.

UPDATE:  9/13/13 – The FBI says the men in the police sketches that they believe abducted Ayvani have NOT BEEN FOUND! It seems that the two men who were found with Ayvani were identified by the FBI as Juan Alberto Rodriguez, a 40-year-old Mexican national, and Wildrego Jackson, 29, of Atlanta.  Rodriguez is being held on immigration-related charges and Jackson is being held on conspiracy to kidnap.

Authorities say they are looking at several other suspects in the kidnapping. They would not elaborate, except to say that two suspects pictured in police sketches released to the public have not been found.

UPDATE 9/18/13 – UPDATE: The Clayton County teen abducted from her home early Tuesday morning has been found at a location in Conyers , Channel 2 Action News is reporting.

On Tuesday, the family of a teen abducted from her Georgia home has now been contacted by the kidnappers demanding a ransom of $10,000. Evidently, the news of the ransom was to be kept from the public, but it was leaked somehow.

Ayvani Perez, 14, was taken from her home on 3894 Brookgate Drive in Ellenwood around 2 a.m., after two masked men pried open a back door of the home and found the family hiding and demanded jewelry and money. Shortly after, they shot the family dog and took Ayvani before leaving.

“We do believe the young lady is in harm’s way. We are actively and diligently investigating this situation to make sure she is returned safely,” Clayton County Police Lieutenant Marc Richards told KSDK news. 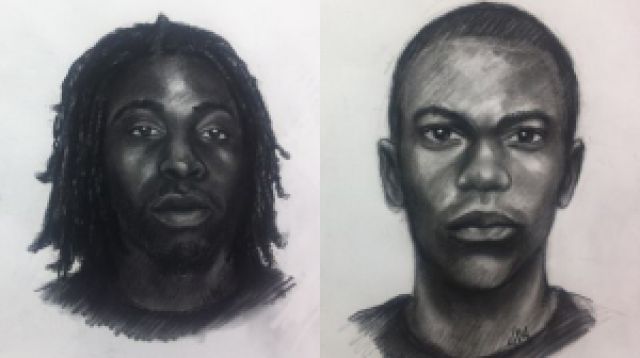 Ayvani is wearing blue and gray Star Wars pajama pants and a superhero shirt. An Amber Alert has been issued from Clayton County.

Police said the men may be driving a grey Dodge or Chevrolet.

If you have any information as to who these men are or the location of Ayvani please contact the hotline at 770-477-3513.