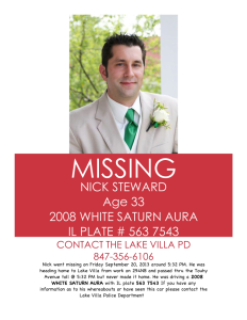 UPDATE:  10/4/13 –  Nick’s body has been found Vernon Hills.  The Lake County Coroner reports that preliminary reports are that he took his own life.

The body was found in a wooded area near Steward’s car after a police officer noticed the car in a parking lot.

A ping from his cell phone came from the South River Road in Del Plaines on Friday night.  The phone is now off.

Anyone with information is asked to call the Lake Villa Police Department at (847) 356-6106.
MissingPersonsOfAmerica

One thought on “Nick Steward: Missing from Lake Villa Found”