Mehria’s body was found underneath a tree on the Barona Indian Reservation near San Vicente Oaks Road and Wildcat Canyon Road by a Sheriff’s SAR team.  She was positively identified through fingerprints by the medical examiner.

Gazelle was arrested as she and her 57-year-old boyfriend exited a friend’s house in City Heights.  The boyfriend was questioned at police headquarters but not arrested. He remains a “person of interest” in the case.  A third person was taken into custody on an unrelated arrest warrant.

“There may be further suspects that may be arrested at some point,” Duran said without elaboration.

“We will be meeting on Saturday, October 5th, at Qualcomm Stadium between 9:00 am – 11:00 am to distribute flyers all over San Diego. We will be at the North East lot, basically you enter the stadium from the main entrance and you make a left and then another left past the yellow chain link gate. We are asking for the public to help us. Please spread the word. Thank you.”

There is a $6,000 reward for information about her whereabouts.

The San Diego County Sheriff’s Department are searching for a missing 79-year-old woman that was last seen in her Serra Mesa home.

Police and search and rescue teams set up a post at 9160 Gramercy Drive to search for missing Mehria Mansury who lives on the 2800 block of Amulet Street.  She was last seen in her home on Sunday.

Teams searched the canyons around Qualcomm Stadium with service dogs, although whether they were SAR or cadaver dogs is unknown. 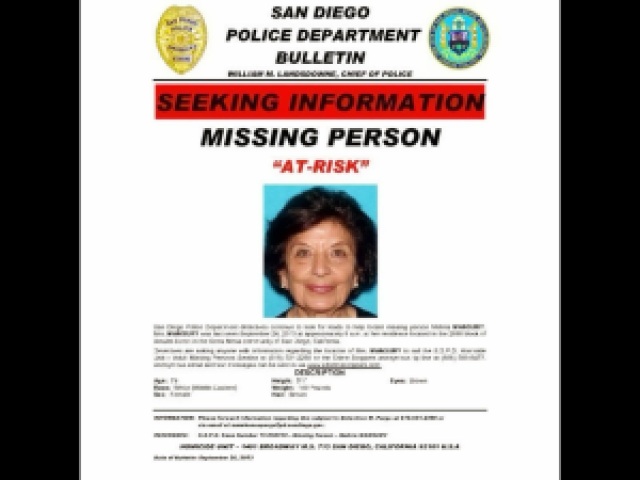 Mehria Mansury disappeared Tuesday morning after leaving her home in the 2800 block of Amulet Street, according to San Diego police. Her cell phone and purse were found at the home and neighbors and family said that she did not suffer with any memory loss.

Also, there had been some type of problems with Mehria’s daughter and her daughter’s boyfriend that lived in Mehria’s garage.

Mansury is middle-eastern with a light complexion, 5’1″ tall and 140 pounds.  She has brown hair and brown eyes.