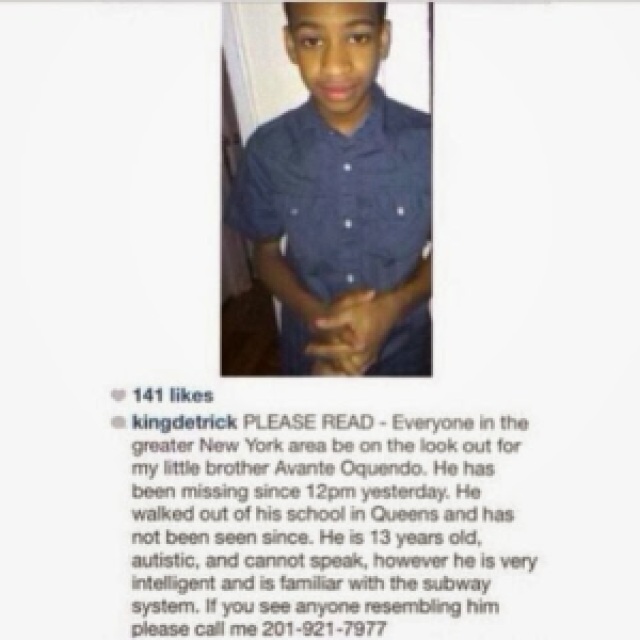 UPDATE:  1/17/14 – Remains found on the shore of the East River may prove to be Avonte’s.  Police are now stating they had a report that he was seen running from a dog, which is one of his fears and now they believe he may have run from that dog and fell into the East River and drowned.  Avonte was also scared of water.

Previous store: Avonte Oquendo, 13, was last seen at his Long Island City,school on 51st Avenue at 12:38 p.m. on Friday, October 4, 2013. Avonte is autistic and is not able to communicate verbally.

“The child’s grandmother spoke to a security guard when she came to the school several hours later,” said the family’s attorney, David Perecman. “And the security guard told her that the child was leaving school, and she said, ‘Where are you going?’ He doesn’t speak. And the child said nothing. And she let him leave.”

Perecman also said, “The school had ordered a lockdown and was looking for the child in the school for an hour before they even let Mom know,” he said.

He was seen on a video running out of the school. He is fascinated with trains and searchers have been concentrating on those areas.

Avonte is described as a 5’3″ tall, and weighs 120 lbs. He was last seen wearing a gray striped shirt, black jeans, and black sneakers.

If you have seen Avonte Oquendo, know of his whereabouts, or have information on this case, you are asked to contact the NYPD Crime Stoppers at (800) 577-TIPS.

One thought on “Avonte Oquendo: Missing teen from Queens”