UPDATE:  1/31/14 – Posted on Justin’s missing Facebook page:  “Justin is ok and safe. Thanks to everyone who has reached out with prayers and support, you have truly touched our lives and we will be forever thankful for that.” 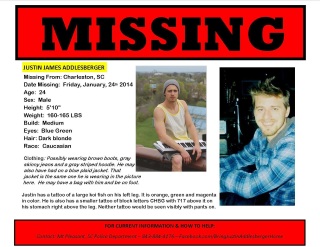 Justin who won many medals as a swimmer, and who graduated from West Point moved to Charleston to pursue his career.  He had joined a band along with Carlin and Corey Fields.    His cell phone was turned off on Friday and he never returned to the Mt. Pleasant apartment.

They noticed the following morning that his duffle bag and shoes were missing.  They had just booked a gig which makes it even stranger that Justin is missing.

Justin is 24, dark blonde hair and is longer as shown in the full photo.  He was wearing gray skinny jeans, a gray striped hood and brown boots and possible a blue plaid jacket.

He may be on foot and carrying a bag.