Breaking News
Home » Found » Is this a missing child being held by a Gypsy? Found

Is this a missing child being held by a Gypsy? Found

UPDATE 2/24/15 – After waiting a very long time this boy has been identified. 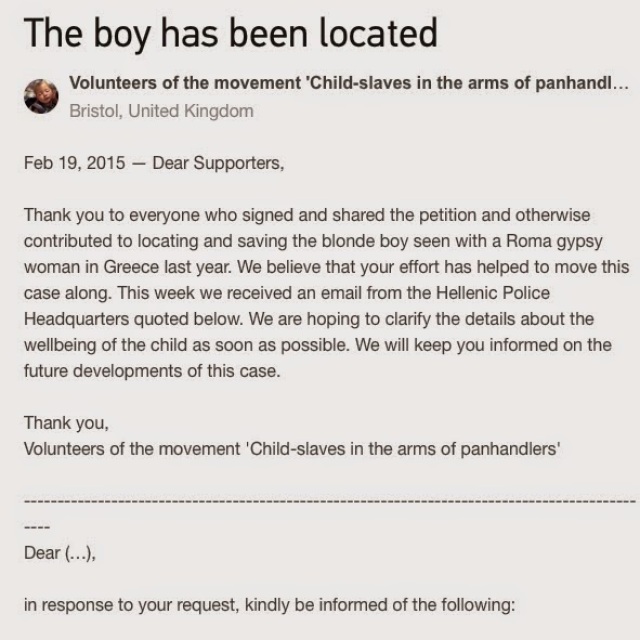 in response to your request, kindly be informed of the following:

Under the supervision of the local Public Prosecutor, the competent Hellenic Police Service has conducted a preliminary inquiry in respect of a Russian tourist’s complaint regarding an alleged kidnapping / trafficking of a minor (a possible human trafficking victim) in the town of Nafplion, in the early July 2014.
The Police, on the basis of provided information and relevant photographs, has managed to track down the minor in question in a ROMANI campsite in the wider area of Nafplion along with the woman who allegedly had pushed him into begging.
According to the woman’s own story, the minor is her grandson. In parallel, in the region in question, the Police has tracked down a young Romani woman, who has claimed that the boy is her son.
For verifying the validity of the a/m claims, a DNA test has been done for the minor and his alleged mother. The laboratory examination of the biological samples done by the Criminal Investigations Division of the Hellenic Police, has confirmed the claim of the young Romani woman that she is the biological mother of the minor.
The collected material from the preliminary examination has been submitted to the Nafplion competent Prosecutorial Authorities for further investigation of the case.

Original Story – I received a message from a follower of MPofA.  She wants everyone to know about a 3-year-old boy who was photographed in Greece that was with a Gypsy.

The boy appears to be 3-4 years old.  His eyes are closed in the photo, so you cannot see what color they are, but he has blond hair and eyebrows with light skin.

According to the email that she received the boy is being used by the Gypsy, by the Gypsy receiving money whenever anyone takes a photo of the child.

“On July 9, 2014, in Nafplio (Greece). He was found in the corner of the streets Kileti str and Vas.Konstantinou. There is a souvenir shop in the corner of these streets. The owner of the shop told her, that this gipsy was vey often mentioned there but this boy was mentioned for the first time. The Russian tourist Natalia Filippova saw a white European boy (maybe a Slavonian) sleeping on the knees of an old gipsy beggar women. The boy is about 3 years old, not very much sunburnt, looks like having come to Greece recently. The way he was sleeping was unnatural, most likely he was under the influence of morphine. The only thing that has been done was taking a photo of the kid for money. The owner of the near-by shop has said something to the gipsy and in half an hour she was gone. Searching for this gipsy on the next day in that part of the city, where she was first seen, gave no result. The local residents report that the police of this city takes no measures in such cases. The best thing the police can do is to drive the gypsy out from the tourist zone. These same local residents said that they had repeatedly tried to inform the police about such cases, but each time it was useless.”

The rumor heard was that the child was ‘from the new arrival.’

The writer believes the child may have been kidnapped from his parents as his skin was light and not sunburned and he was not skinny.

The information has been sent to the Nafplio police and to the Greek Ombudsman, the Greek charitable organization ‘Child’s Smile’ and several international organizations searching for the lost children.   Please tell everybody who see him in Greece call 1056 (this is number of company who helps children).”

Back in October 2013, social media tried to identify a blonde-haired little girl that was found.  She was a 4-year-old girl, named Maria and was found in a gypsy camp in Greece that many believed could have been Lisa Irwin.  The officials noted she had blonde hair and light eyes and didn’t match the rest of the family.  DNA tests later proved that Sasha Ruseva, a Roma women living in Nikolaevo in central Bulgaria was the mother of Maria.  She gave birth to her in Greece while working as an olive picker on January 31, 2009, then gave her away when she was 7-months-old to her employers. Read more here.

Is there a young blond boy that has come up missing somewhere in the world and is now with this woman in Greece or is it another case of a Bulgaria child that was given away?

3 thoughts on “Is this a missing child being held by a Gypsy? Found”