UPDATE:  10/25/14 – The remains found on Old Lynchburg Road have been identified as belonging to Hannah Graham. 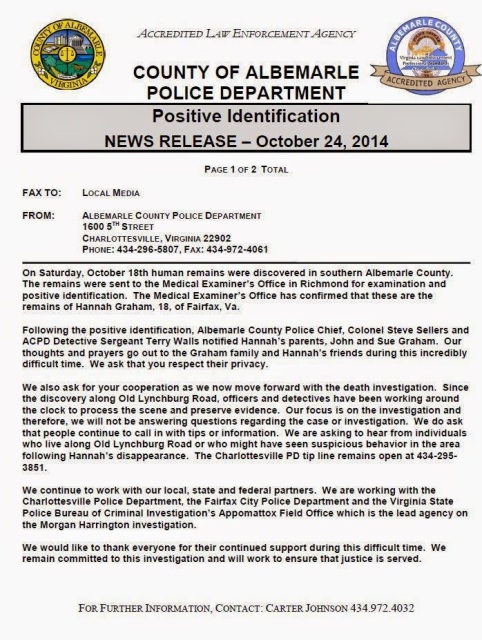 UPDATE:  10/19/14 – Remains have been found on Old Lynchburg Road in Charlottesville.  The location of the body was behind a vacant home found by a small search team led by Sgt. Dale Terry that decided to leave the Walnut Creek Park area and search at a location where Jesse Matthew’s grew up.  Police Chief Tim Longo wiped away tears during a press conference when he announced the discovery of the remains. 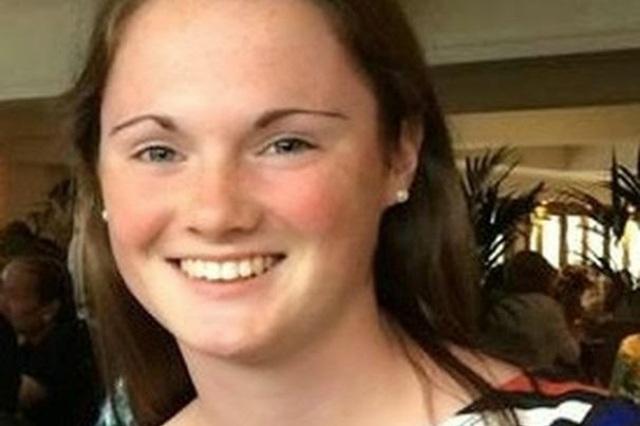 UPDATE:  10/2/14 –  Jesse Matthew who has been charged with the kidnapping Hannah was seen on a video surveillance with Hannah before she went missing.  Further investigation has found that Matthew was also accused of two assaults in Oct. 2002.  A woman accused Matthew of raping her on campus, but later declined to press charges.  Then in 2003, Matthew was accused of a sexual assault on campus, but Matthew left the school and no further info was found on this case.  Tuesday, Virginia State Police said they have found forensic evidence linking Matthew and Morgan Harrington, 20, a Virginia Tech student who disappeared in 2009.  Her body was found a year later.

UPDATE:  9/26/14 -Charlottesville Police Chief Timothy Longo said Wednesday that  Jesse Leroy Matthew Jr., 32,is in custody in Galveston and charged with abduction with intent to defile in the case of Hannah. The Galveston County Sheriff’s Office said Matthew was located on the beach in Gilchrist on the Bolivar Peninsula around 3:30 p.m. Wednesday.

UPDATE 9/19/14 – A search warrant has been issued at the Hessian Hills apartment located off Barracks Road in Albemarle County. Police are executing two search warrants, one on the car and one on an apartment that the authorities believe was the last place that Hannah was seen. Because the information in the search warrant was sealed there is no further information at this time.

The Charlottesville Police Dept. have been exemplary in their search for Hannah.

UPDATE: 9/18/14 – The police have released four videos now.  One showing a man following Hannah for a brief time and another showing a man putting his arms around her.  Click here to read full story.

Previous story:  Hannah Elizabeth Graham, 18, from the University of Virginia has been reported missing on Sunday, Sept. 14, 2014.  She was last seen late Friday night.

Hannah Elizabeth Graham, a student at the college, is described as a white female, 18 years old. She is approximately 5’11” with a skinny build. She has blue eyes, light brown hair and has freckles.  She sent a text to friends at about 1:20 a.m. on September 13, according to a report on newsplex.com.

On Sunday, her friends and family realized that none of them had seen or had contact with her since Friday night and a call was placed to the Emergency Communications Center by her friends, reporting her missing. The Charlottesville Police Department in turn notified the University of Virginia Police Department of the report.

Charlottesville Police detectives responded immediately and have been working to find Hannah since learning of her disappearance. A search using a bloodhound was conducted Sunday evening, but that search did not turn up anything useful.

If anyone has any information or has seen Hannah anytime from Friday night to the present, please call the Charlottesville Police Department at (434) 970-3280.