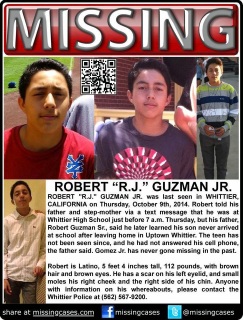 Update;  RJ has reported that his son has been found.

Previous story:  Robert RJ Guzman from Whittier, Calif. has been missing since Oct. 9.  He told his dad via a txt message that he was at school but his father learned later he never arrived.