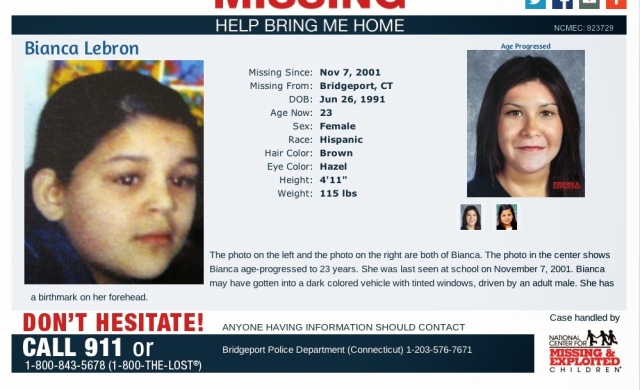 Bianca was last seen at school on Nov. 7, 2001.  She told her teacher that her uncle was taking her shopping and she was seen getting into a van around 8:30 that morning.  A man was seen driving the van that was two tone brown and tan with tinted windows.  The man made no attempt to hide his face and he had curly black hair, long sideburns and a beard with brown eyes and a prominent nose and scratches on both of his cheeks.  He was wearing a Gap shirt and Fubu jeans with an image of Fat Albert on the right rear pocket and scuffed Timberland boots.

Bianca’s parents did not know she was missing till 4:30 that afternoon when she did come home from school.  By 8:30 p.m., they called the police to report her missing.

This year, Bianca turned 23-years-old and we can only hope that she is still out there somewhere and sees the photo of herself.

The Lebron family filed a lawsuit claiming Bianca’s teacher let her leave without stopping her, and reached a settlement in 2008.  The city was to pay $750,000 to the Lebron family.

2 thoughts on “Bianca Lebron: 10-year-old missing from Bridgeport since 2001”