“We have reached out the missing persons family to let them know we have recovered the vehicle,” said Frank Sousa, Broward County Sheriff’s Office, told CBS Miami.
It iwas confirmed that there is a body inside the car but police have not said if it’s Gordon’s body. 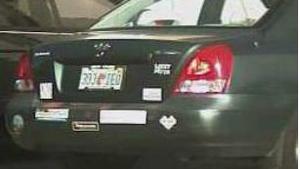 Lisa is known as Noodles as her business name is Noodles on Jupiter.

Her friend said she would have never left her cats alone and unfed.
.
Police say Hayden-Gordon is 5-foot-6, weighs about 100 pounds, and has a thin build. She was last seen wearing a short sleeve orange shirt, blue jeans and sneakers with glitter.

Lisa drives a light blue 2003 Hyundai Elantra with multiple stickers all over the outside of the car. The car’s Florida license plate is 303 IEQ.

Investigators are asking anyone with any information to call Fort Lauderdale Police at 954-764-4357.