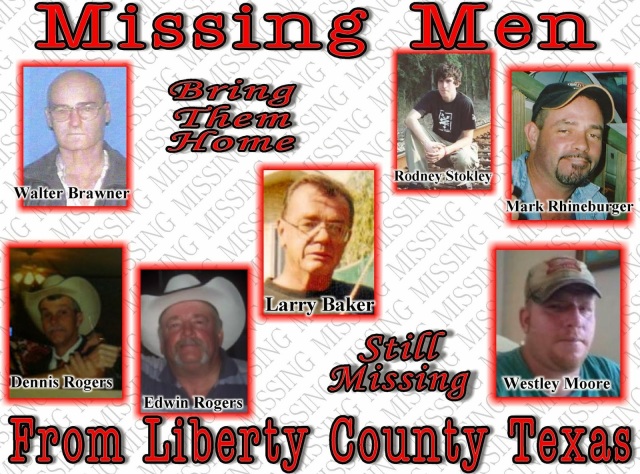 All these men are missing from Liberty County Texas.

These names have numbers because they are part of the Missing Texas Forty, which is a list of 40 plus men and woman that have disappeared from Montgomery County and Liberty County, Texas.

Two of Mr. Brawner’s children had stopped by to visit him for Father’s Day in 2008. Mr. Brawner’s vehicle was in the driveway, but there was no response at the door. The adult children went to a neighbor who had a key that allowed them entry into their father’s home. Mr. Brawner was not there. The children became suspicious of the neighbor upon asking some questions and called the local authorities and reported their father missing. Mr. Brawner has not been found to date. Foul play is suspected and the neighbor is a person of interest in this case.
https://www.findthemissing.org/en/cases/2593/23/
http://texasequusearch.org/2009/01/brawner-walter-bo-shepherd-tx-missing-061008/
http://www.chron.com/news/houston-texas/article/Disappearance-of-Piney-Woods-hermit-baffles-1725482.php

His father related what he knows of the night his son disappeared — Jan. 22, 2008.
A buddy of Rodney’s had picked him up at the family’s home and taken him to Brookhollow Apartments for his buddy’s birthday celebration. What he knows about what happened next is based on the friend’s account and what police have uncovered.
“His buddy and girlfriend were arguing so Rodney said he would leave, and left on foot. He made a couple of phone calls including one to his girlfriend. He made a couple more phone calls after that but the battery on his phone was going down,” said his father. The last of the calls he made pinged, or connected, off a cell phone tower on Wells Road off Plum Grove Road. After that, no calls were made from the cell phone and no one ever heard from Rodney again.  “Everything was going good and then Rodney disappeared. It’s not like him to be gone and not in contact with us,” said Rodney Sr. “That’s where his trail ends.” The “not knowing” is the worst part of it all for the Stokley family.
http://www.txdps.state.tx.us/mpch/mpdetailsPrintt2.asp?id=%27M8/12/20089:55:52AM%27&Person=Missing%20Person  http://helpfindthemissing.org/forum/showthread.php?t=1909&page=2

Dennis Rogers- 41.  03/08/2012 Dennis Rogers, 54,  from Plum Grove, Texas Liberty County was last seen going for a walk in the woods near his home on CR 347 South.  He called 911 and told them that he had gone too far and was lost.  The authorities reported on March 13 that the case was now criminal and would not elaborate any further.

Edwin Rogers – 37.   12-30-2011: Edwin Clark Rogers, w/m, 62 y/o. Tarkington, Liberty County, TX
Rogers’ son, David, and his own brother, Lesley Rogers, were the last two people he spoke with before his disappearance. Lesley Rogers said his brother told him he had been at the VFW in Liberty.
“I talked to him at 11:43 p.m. on the 30th,” said Rogers. “He asked if I was still up. I said no, so he said, ‘Ok, I’m gonna go on then.’ I guessed he was talking about going home.”
David Rogers said his dad had called him a few minutes earlier and said the same  thing.  No one has heard from Edwin Rogers since then. The next day, Dec. 31, Rogers’ stepson, Josh Roskie, said he and his wife saw Rogers’ jeep on the side of SH 321, but didn’t think anything about it because his parents had argued and were separated at the time. He said a few days later, several other people had seen the jeep in the same location, so he began to worry and called his mom. Roskie said after he called his mom, she went down to the car and placed a rock on the tire as a way to monitor the vehicle’s movement. She also found Rogers’ cell phone under the front seat and became worried. Rogers’ stepdaughter, Gina Goh, said she found out about her stepfather’s disappearance on Friday, Jan. 6, and reported Rogers as missing to authorities.
Family members say it is completely uncharacteristic of Rogers not to keep in touch.
Rogers’ sister-in-law, Tabitha Rogers, said she suspects foul play.  “He just doesn’t disappear like this,” she said. “It’s not like him not to keep in contact with family.”
http://texasequusearch.org/2012/01/missing-edwin-rogers-62-yrs-liberty-county-tx-123011/
http://www.myfoxhouston.com/dpp/news/local/120109-foul-play-suspected-in-tarkington-man’s-disappearance?
http://www.click2houston.com/news/Deputies-search-for-missing-Liberty-County-man/-/1735978/7663114/-/1e8wdqz/-/
http://www.yourhoustonnews.com/cleveland/news/questions-remain-in-tarkington-man-s-disappearance/article_da656893-03ec-58d9-84dc-783dbb847b11.html
http://blog.chron.com/newswatch/2012/01/texas-equusearch-joins-search-for-missing-tarkington-man/?utm_source=twitterfeed&utm_medium=twitter

A 54-year-old Cleveland area man remains missing and endangered on Monday. Larry Richard Baker, Sr. suffers from multiple serious health problems including high blood pressure, multiple strokes and the beginning stages of dementia.
Baker, who lives near the intersection of Plum Grove Road (FM 1010) and CR 325 was last seen Thursday night by his sister who lives on the same property when she took food to him.
http://www.txdps.state.tx.us/mpch/mpdetailsPrintt2.asp?id=%27M2/3/20114:01:28PM%27&Person=Missing%20Person
http://montgomerycountypolicereporter.com/?p=3310