Noncritical: Documentary film talks about the lack of media for black and missing 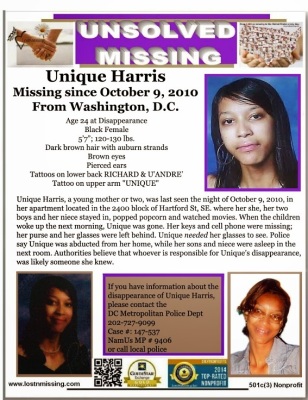 Noncritical Film has finished a documentary on the subject of missing Unique Harris and whether their is enough attention given to black and missing in America.

This short film “follows the journey of a grieving family in the search for their missing loved one – Unique Harris, a black missing mother of two from Southeast D.C., taken from her apartment as her two boys and niece were sleeping on October 10, 2010. As Unique’s detective weighs in on motive and suspects, the film’s re-enactment scenes depicting her final hours illuminate the theories behind her,” says Kelsey Marsh the producer and editor of the film.


Unique’s story was filmed and produced by Noncritical Film’s, and who partnered with the Black and Missing Foundation, just found out that this film had been accepted into the 5th Annual Charlotte Black Film Festival.

In the film, the most interesting person is Valencia’s herself, that does a wonderful job of explaining what she thinks happened to her daughter.

The question arises in the film of whether lower income missing people do not get as much attention when they go missing.

“It took me months to get national exposure for my daughter,” said Valencia.

Valencia is the main character in this documentary as her vigilance and strength is compelling and real as she tells of her search for her missing daughter.

The cinematography in this documentary is wonderful and the scene where the balloons are released would be magically if it wasn’t for the sad reason for the vigil.

Please take a few minutes to watch the trailer below and if you have information about Unique, please call 202-715-7300 or leave an anonymous tip here.