UPDATE 8/13/15 – The official cause of death from the Roanoke Medical Examiner was drowning. They also stated that the cold temperatures caused hypothermia that probably also contributed to Noah’s death.

The felony homicide charge against Noah’s mom, Ashley White was dropped because the judge ruled there wasn’t enough evidence to connect Noah’s death to Ashley White leaving her kids at home the day. Further information is that a deputy told the court that he “kicked the lid off” and that the tank lid easily “popped off,” as he came across it during his search.

Dr. Tharp told the judge she does not know how Noah got into the septic tank to begin with. It was confirmed the parents both lied and did not take the kids with them when Ashley drove Noah’s father to work. The kids both were left home alone.

“The death of young Noah Thomas is still very much an active investigation by the Pulaski County Sheriff’s Office. As Sheriff, I want the citizens of Pulaski County to know that at no time during this investigation have authorities suspected there was a lingering danger to your children. An initial autopsy was conducted in Roanoke but will not be complete for several weeks. Unfortunately, certain tests take a long time to complete and the final cause of death is dependent on those results.  I understand your frustration with the lack of details surrounding Noah’s death: however I ask that you respect my office’s mission to thoroughly investigate the circumstances of this case and at the appropriate time – when it would not otherwise jeopardize this investigation – we will make a formal statement on the findings.”

UPDATE:  3/28/15 – Police say they got a “hard and credible tip” that told them to look inside the septic tank where they found the body of Noah Thomas. (This was probably from the deputy who later testified in court that he found the sewage tank lid easily “popped off.”

Montgomery Sanitation Services out of Christiansburg was called to drain the septic tank. Sheriff Jim Davis said that FBI agents and Pulaski County investigators had already removed the two-pound plastic lid. They saw sludge, put the lid back on, and called the Montgomery Sanitation Services company to come drain the tank. When the company began pumping they found Noah’s body.

UPDATE:  3/28/15 –  “We have received several messages and comments concerning distasteful and threatening Facebook posts supposedly coming from a screen name ‘David Allen Viers’. Our agency and the Pulaski County Sheriff’s Office has been looking into this matter all morning and upon initial investigation the page was hacked and it is not David Allen Viers posting these comments. He is maliciously being targeted and his phone number posted. The incident is still being investigated.”

UPDATE:  3/26/15–  The Pulaski County boy who was missing since Sunday has been found dead, according to three law enforcement sources.  Noah was found in a septic system on the Highland Road property he went missing from when crews pumped the septic tank on parents property. Police tape is around the house, and Investigators wearing white hazmat-type suits are at the scene.  There is also yellow tape around Noah’s home.

UPDATE 3/26/15 – Noah is still missing.   A prayer vigil is being held Thursday night for Noah Thomas. You are asked to bring a candle to light at the vigil. It takes place at the Bland County Fairgrounds Pavilian at 8 p.m

At a press conference on Thursday morning the timeline on the morning Noah disappeared was clarified.  Ashley Jennifer White, 31, returned from dropping off Noah’s father Paul Raymond Thomas, 32, at work, and stayed awake until 8 or 8:15 a.m., and then laid down to take a nap.

UPDATE 3/25/15 – Today is the fourth day of searching for #missing #NoahThomas.  There has been no sightings of him, nor any indication that he was anywhere in the surrounding area.  The police are going to search the landfill today.  They are positive that Noah is NOT in the pond.

My thought is that it is possible that Noah never made it back home after his mom dropped off their dad at work.  (Later it was found that Noah never went with his parents in the car that morning, as the parents said they did).  I am hearing different times and it was mentioned that Ashley returned home at 7:30 a.m. and went back to bed either at that time or at 9:30 a.m.  Neither mom or dad have talked with the media, and are inclusively talking with the authorities only.

UPDATE 3/24/15 –  Noah Thomas is still missing.  The plan today is to continue to search which includes retracing their steps, horse mounted searching, helicopters and draining ponds.  They are also checking registered sex offenders in that area. Police still state they do not believe there is any foul play with his disappearance. 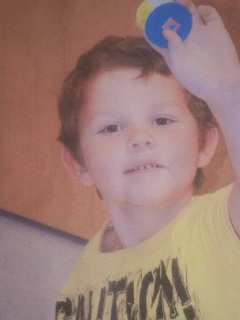 As of noon (eastern time) today, Noah Thomas is still missing.  No more mention of his being with another child and that may be info that is not necessary true at this point, but I do not know why the media put it out yesterday.  The search is still on for this boy.

Original story. Noah Terry Thomas, 5, from Dublin, Va, is missing.  He is believed to have left his house at 5461 Highland Road in Dublin, Va., with another male child around 10 a.m. on Sunday morning (this first media statement regarding another male child has been no longer mentioned, so I will assume there was no other child involved).  His mom saw him watching cartoons at 9 a.m., so she went back to bed (this time line has been updated to 7:30 a.m.)  At 10-10:30 a.m. he was gone, and the door was open.

Noah is 4 feet tall and weighing 60 pounds. He has green eyes and red hair and was last seen wearing a camo jacket, black and yellow pants and Spiderman rain boots.

One thought on “Noah Thomas: Missing 5-year-old from Virginia Found”