UPDATE:  2/5/16 – A human skull was found in a creek at Jack Carter Park behind Carlisle Elementary School by a cyclist on Tuesday and on Thursday the police state the remains have been identified as Christopher’s. After the skull was found authorities went to the area and found more skeletal remains. No determination has been made on his cause of death yet and will be determined by a medical examiner.

Original story:  Christopher David Tennyson, 47,  has been missing since Sat. April 4, 2015 from Plano, Texas.He was last seen at his home near Spring Creek Parkway and Green Oaks Drive.  The police believe he left on foot or a friend came by and picked him but.Tennyson left his wallet, ID, keys, medication and cellphone at his home.Tennyson does go for walks but usually returns in a couple of hours.  This time he did not return and his wife, Faith, stated that he had been feeling depressed and had a lot of his mind. Also, he had been seeing a neurologist and his judgement may be not as clear.  Also, the disorder may make him appear intoxicated, when he is not.The authorities searched the Chisholm Trail and local business to see if anyone has seen him.  They have also used a dive team to search Big Lake Park but nothing was found.

Tennyson is 5’8″ tall, 180 pounds with blond hair and blue eyes and he was wearing glasses, Teva sandals, khaki shorts or jeans and a t-shirt.  He has a ruddy complexion and a large yellow tiger tattoo on his right calf. 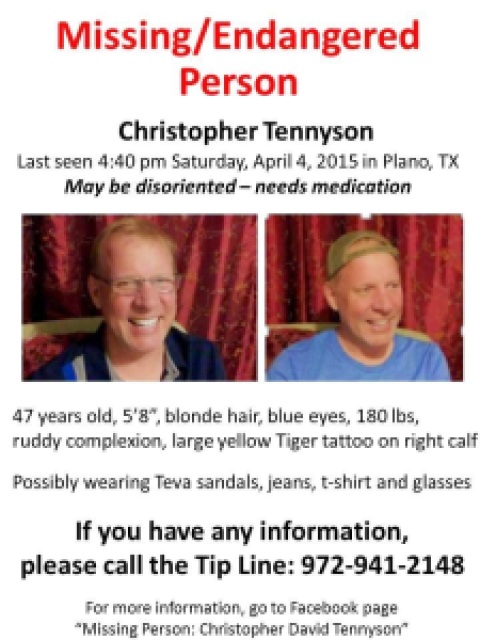