Leslie Roy and Lee Wright: Sisters go missing on way to UP FOUND 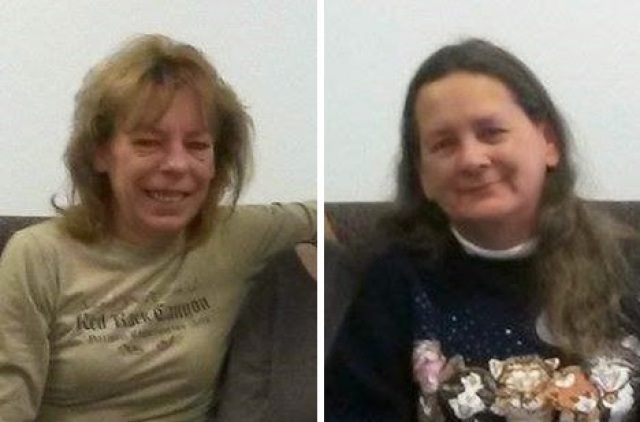 UPDATE:  4/24/15 – Leslie and Lee have been found alive.  Their car  got stuck near Crisp Point on Lake Superior in a remote area and they remained with the car.  They were spotted by a helicopter on Friday and the two woman got out of the car and began waving their hands in the air.  Both women were reportedly weak and taken to the Helen Newberry Joy Hospital for evaluation.

The two women survived on Girl Scout Cookies and Cheese Puffs until they were found.

Original story:  Leslie Roy, 53, from Nebraska and her sister, Lee Marie Wright, 55, from Oklahoma went missing while driving from Ishpeming to the Upper Peninsula on April 10, 2015.

They went to visit their other sister at a nursing home in Ishpeming and planned to stop at the UP and then travel to Kalamazoo to visit more family, but they never arrived.

Relatvies lost track of the sister between Ishpeming and Mackinaw City where they were to check into a hotel and they never did.  Mackinaw City is where you go to get on the ferry to go to Mackinac Island.  They talked about going to some waterfalls, and police are checking on that.

The sisters were traveling in a white 2010 Ford Explorer with Nebraska license plate number of TVC973 or TTM081.

They have cellphones but no one has been able to reach them.

One thought on “Leslie Roy and Lee Wright: Sisters go missing on way to UP FOUND”